Training for the week had been geared around preparing to play on the tiny, but picturesque, St  Mary’s “oval” in Glen Iris.

The game was an extremely physical affair early with Riley Verbi in particular coming in for some heavy punishment, but as we have come to expect, he responded magnificently capping off an outstanding game with four goals.  The work of Josh Holding in helping create space between Riley and his “tagger” should not be underestimated.  Ben Hart and Simon Bennett were also excellent forward targets, each kicking three goals, and were ably supported by Scott Kaiser with two.

Perhaps the highlight of the day was the performance of the backline.  After the loss of Harrison Lucas to an ankle injury in the opening minutes of the game the six remaining backs were resolute in holding the opposition to just two goals in the second half.  It was a consummate display of balance between defence and attack, with each of Robbie West, Lachie Powell, Tom Oliver, Rob Deev, Andrew Parker and Rob Vienet mixing intercept marks with spoils, tackles and run and carry at the appropriate time.

Overall, this was a very solid win in trying conditions with limited rotations for the players as the bench was down to one by mid-way through the third quarter.  A special mention to Andrew Parker who played his 100th game for the club on Saturday.  He is an outstanding clubman and is providing great leadership to the younger members of the team – well played “Parks”. 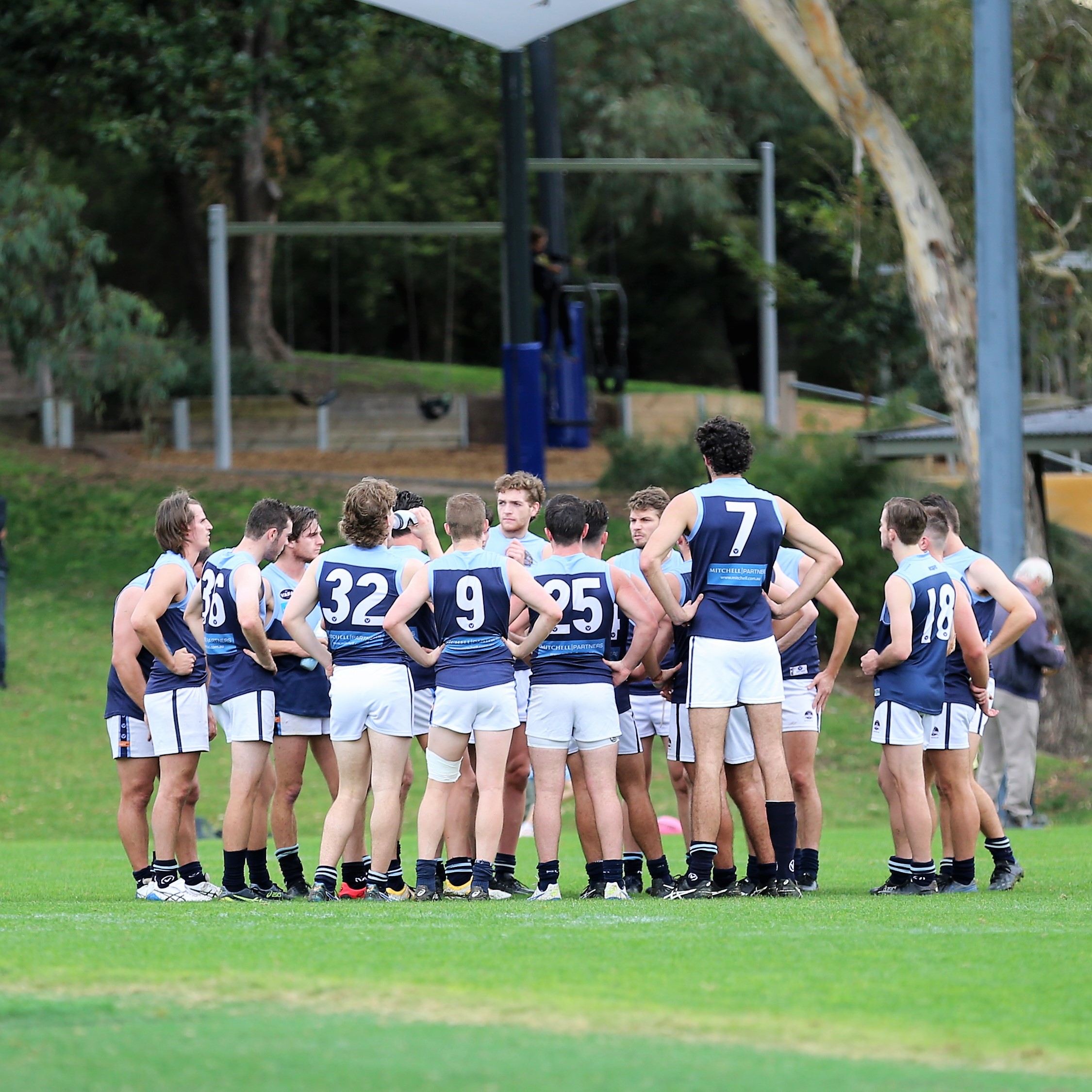 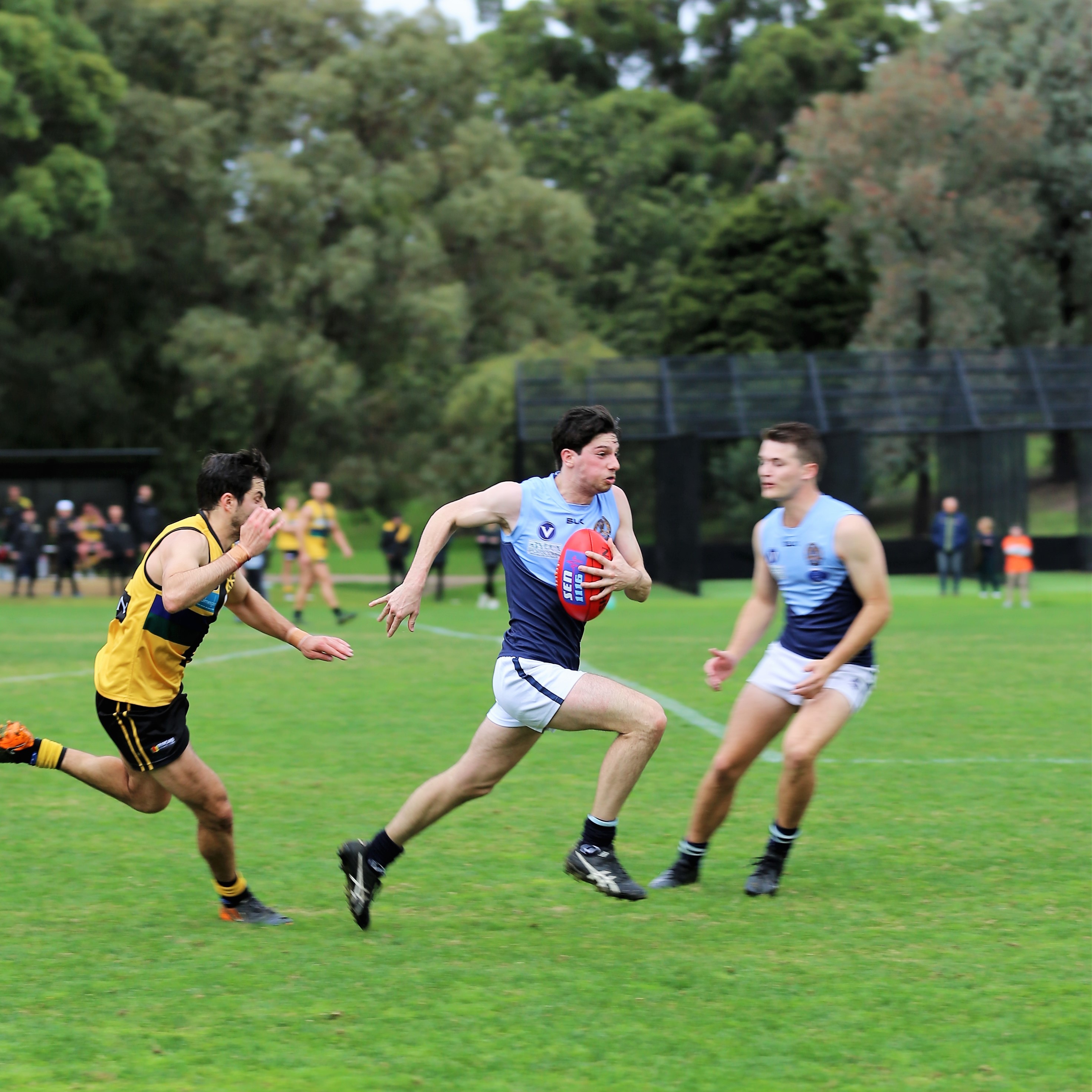 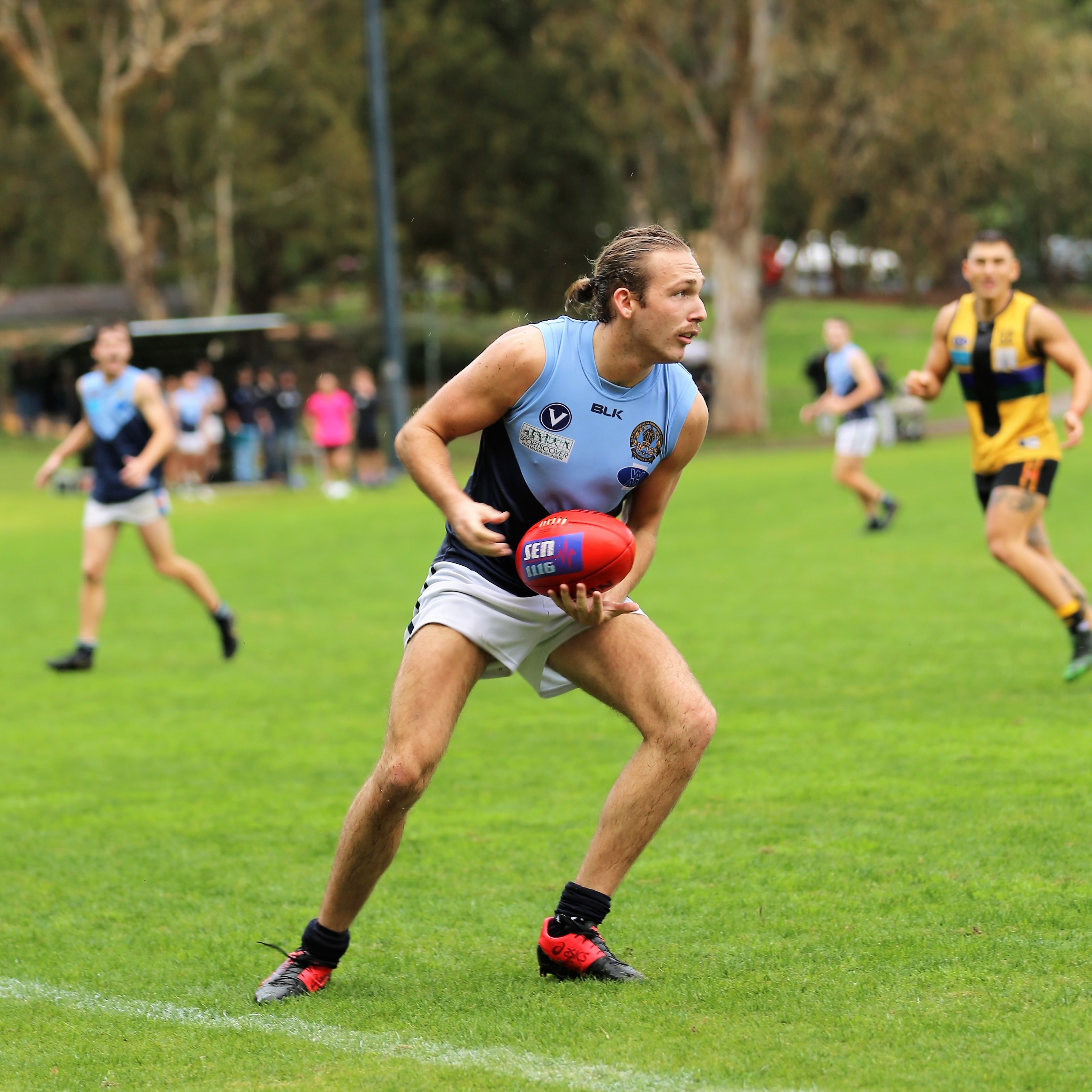 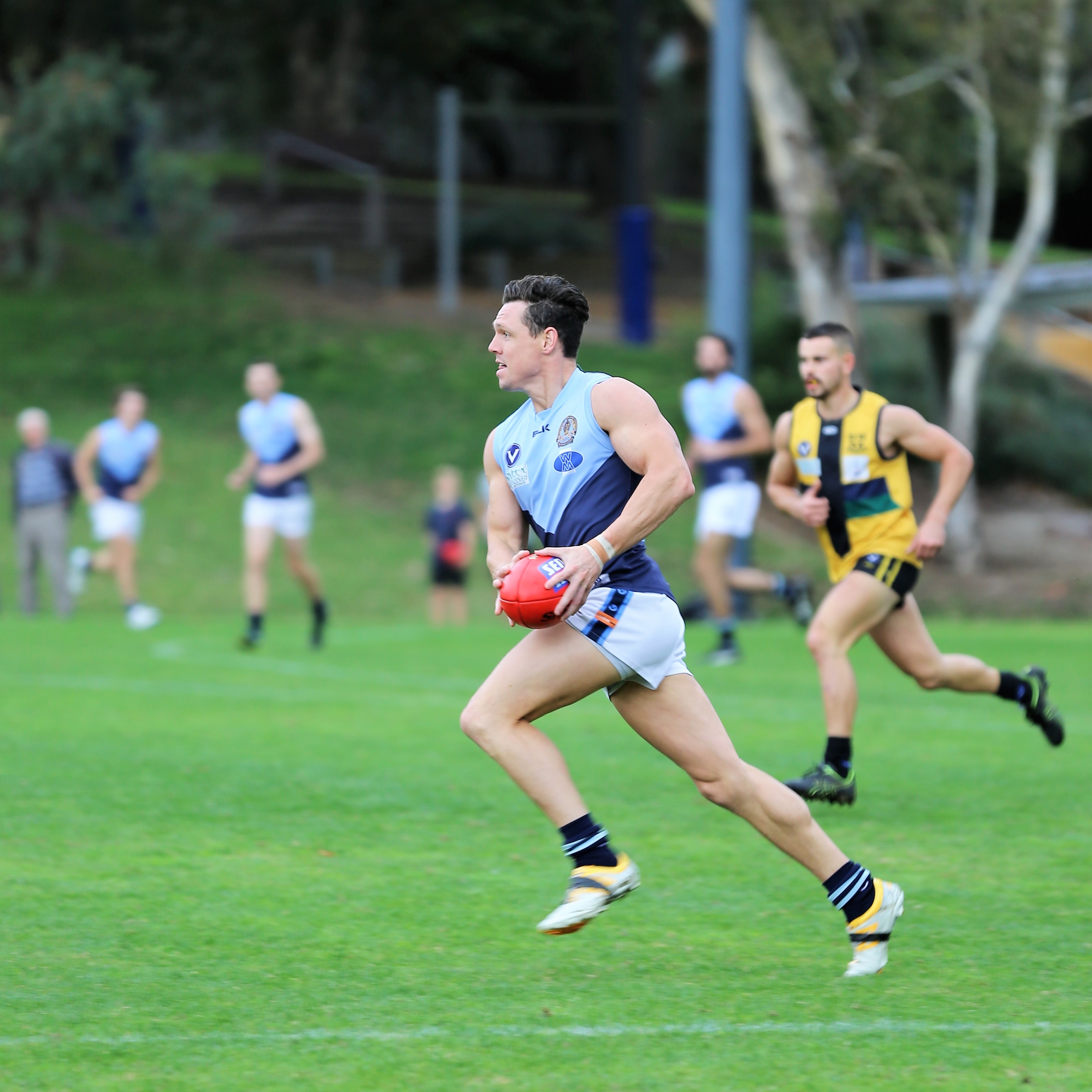 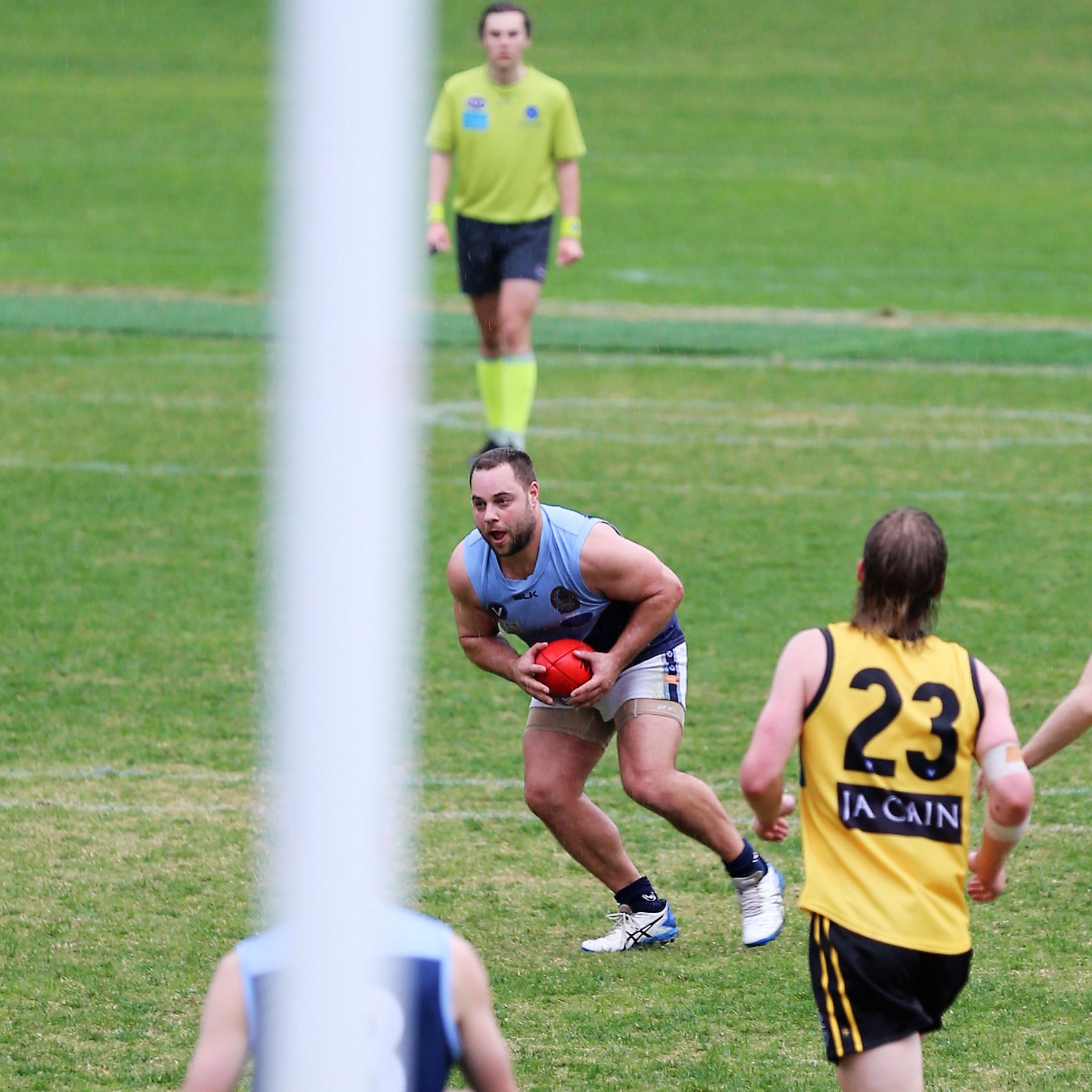 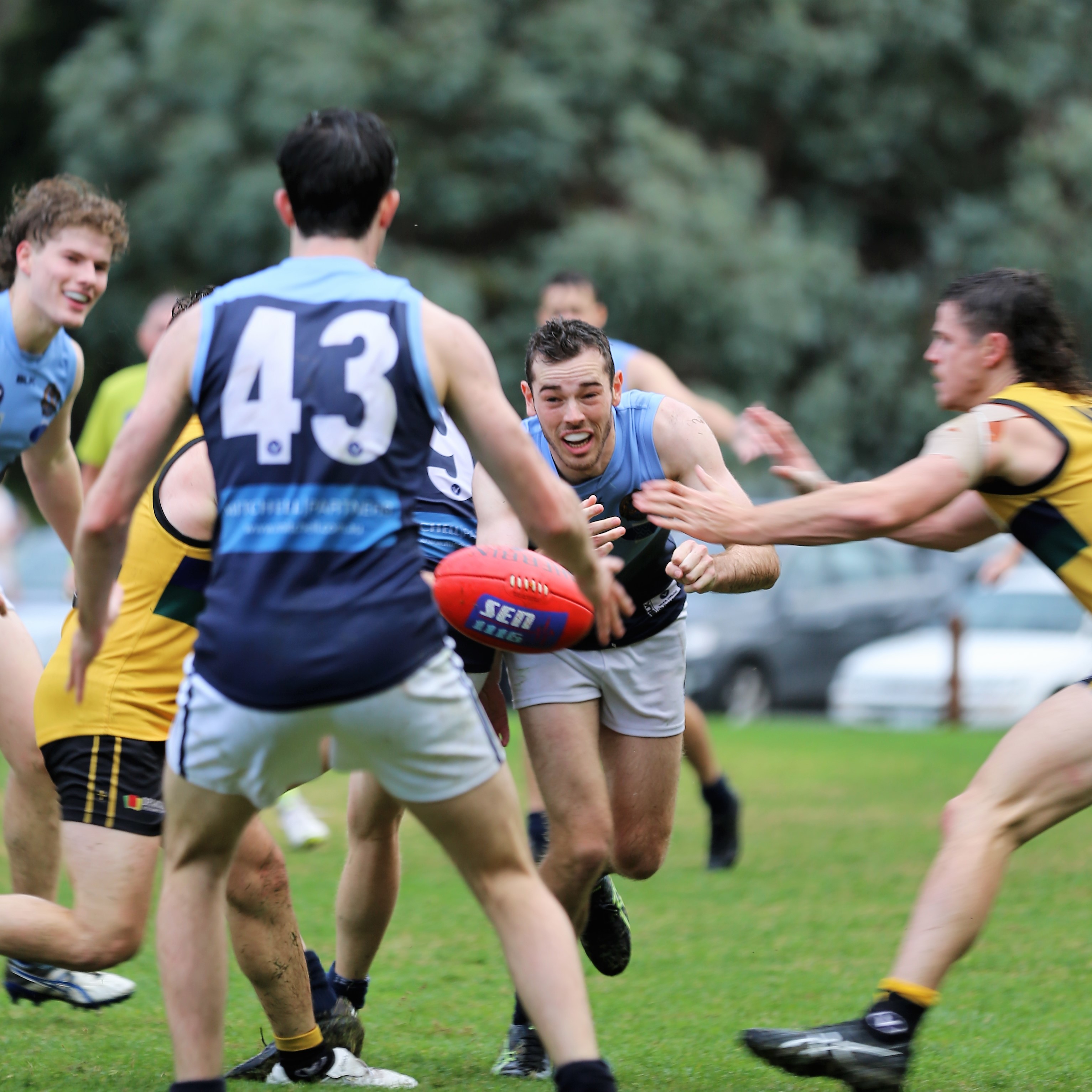 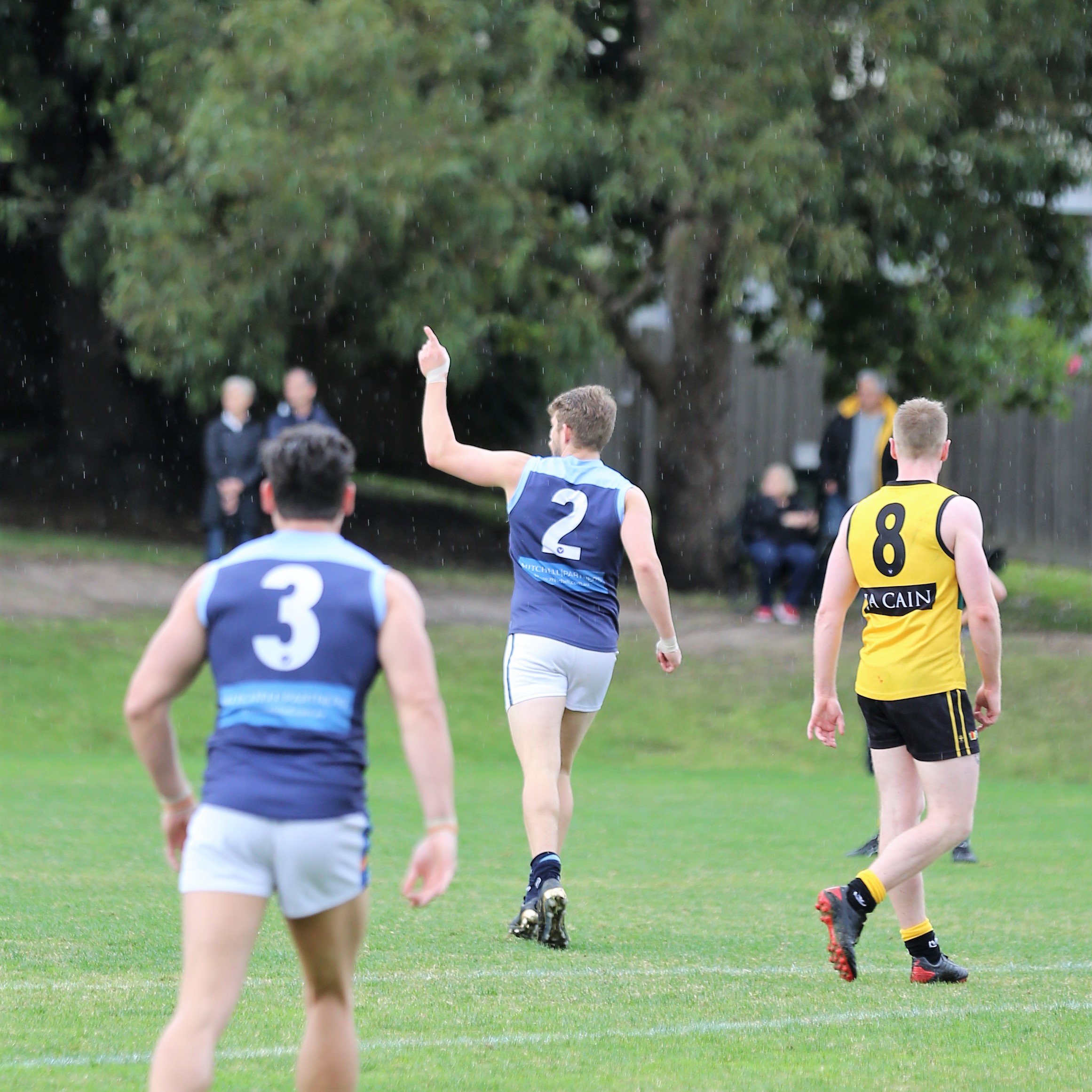 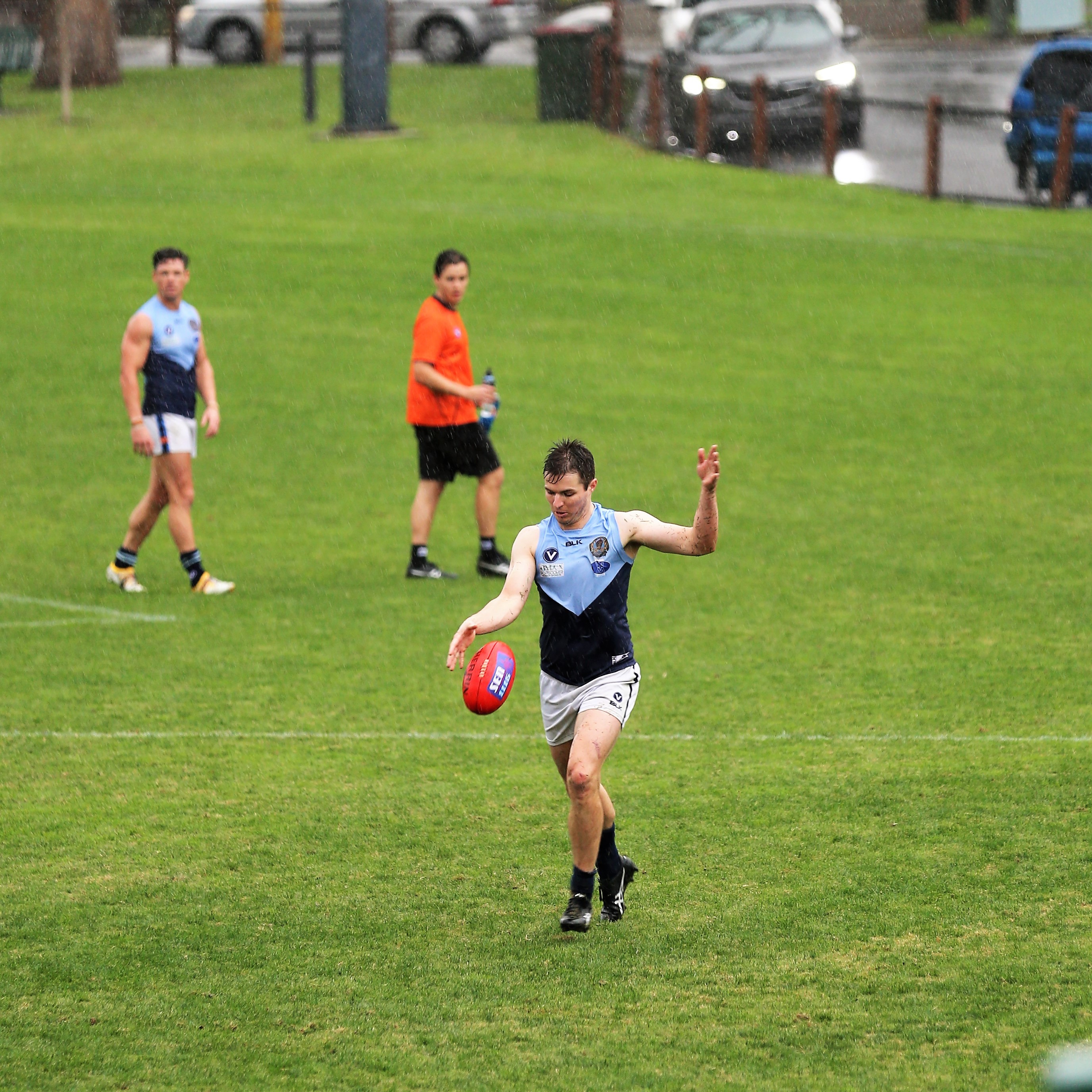 Coming off our first win of the season we were keen to keep the momentum going against Fitzroy.

It was a perfect day for football at GBO on Saturday afternoon and with 3 players making their senior debuts for the round - Emma Hooper, Louise Zhang and Gigi Hooper-Birch, there was plenty to be excited about.

In the start of the second quarter, our midfield got on top with Claire Wilson, Maggie Wilson, El Defina and Dee Boothleading the charge and bringing their teammates with them as we took a handy lead into the half time break thanks to goals from Nat Decarne and El Defina.

The second half was a real arm wrestle with the ball continually moving between the arcs with many of our forward entries coming off the back of our half back line as Steph Defina, Amelia Robinson and Louise Anderson read the ball well and rebounded all day.

Our final term was a real testament to the unity of the group as every player continued to rally and work hard to finish out the game which resulted in the 16 point win.

Thank you again to all volunteers on the day and the supporters who cheered the team on. The hard work continues next week as we take on Old Geelong at Como Park. Up the Wells!!! 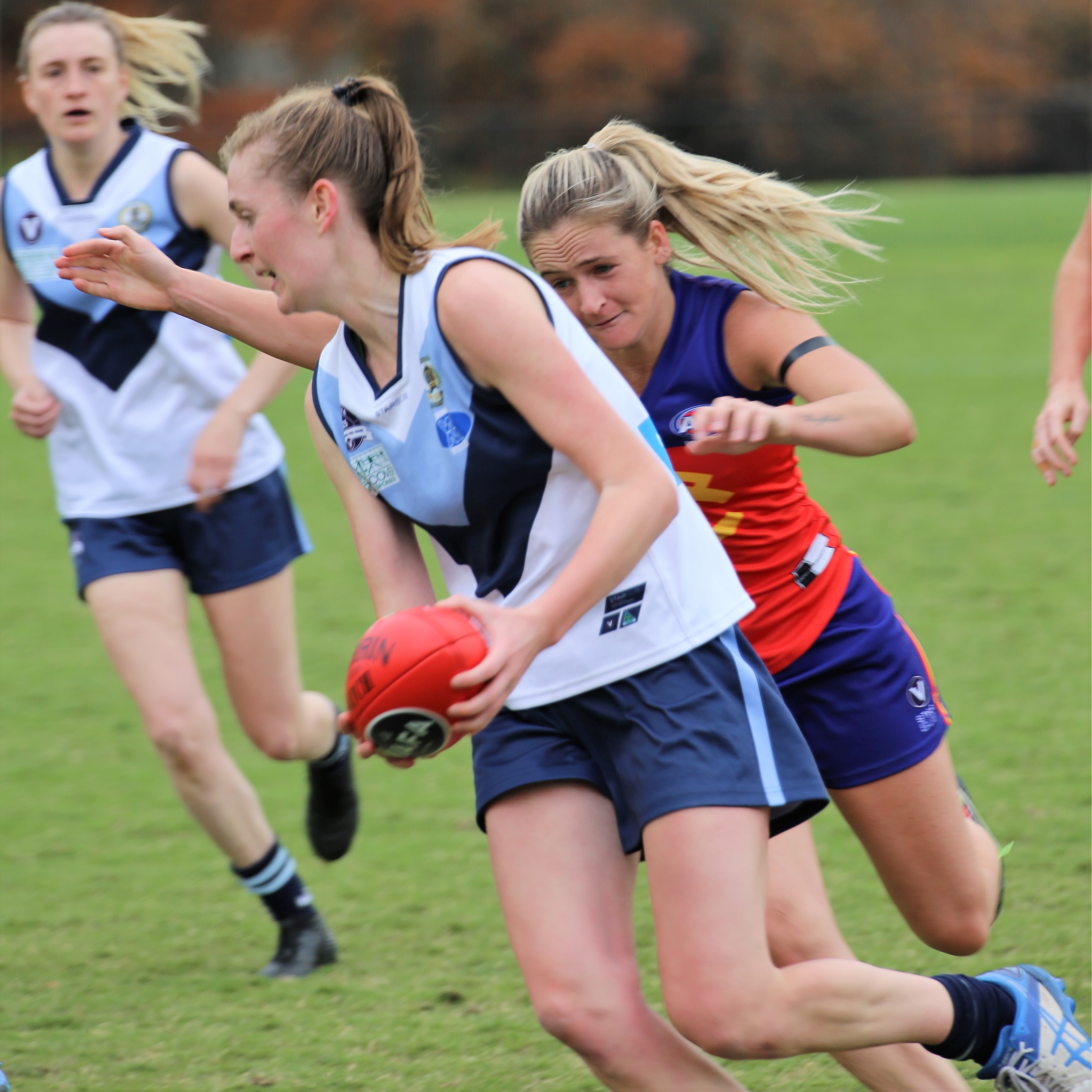 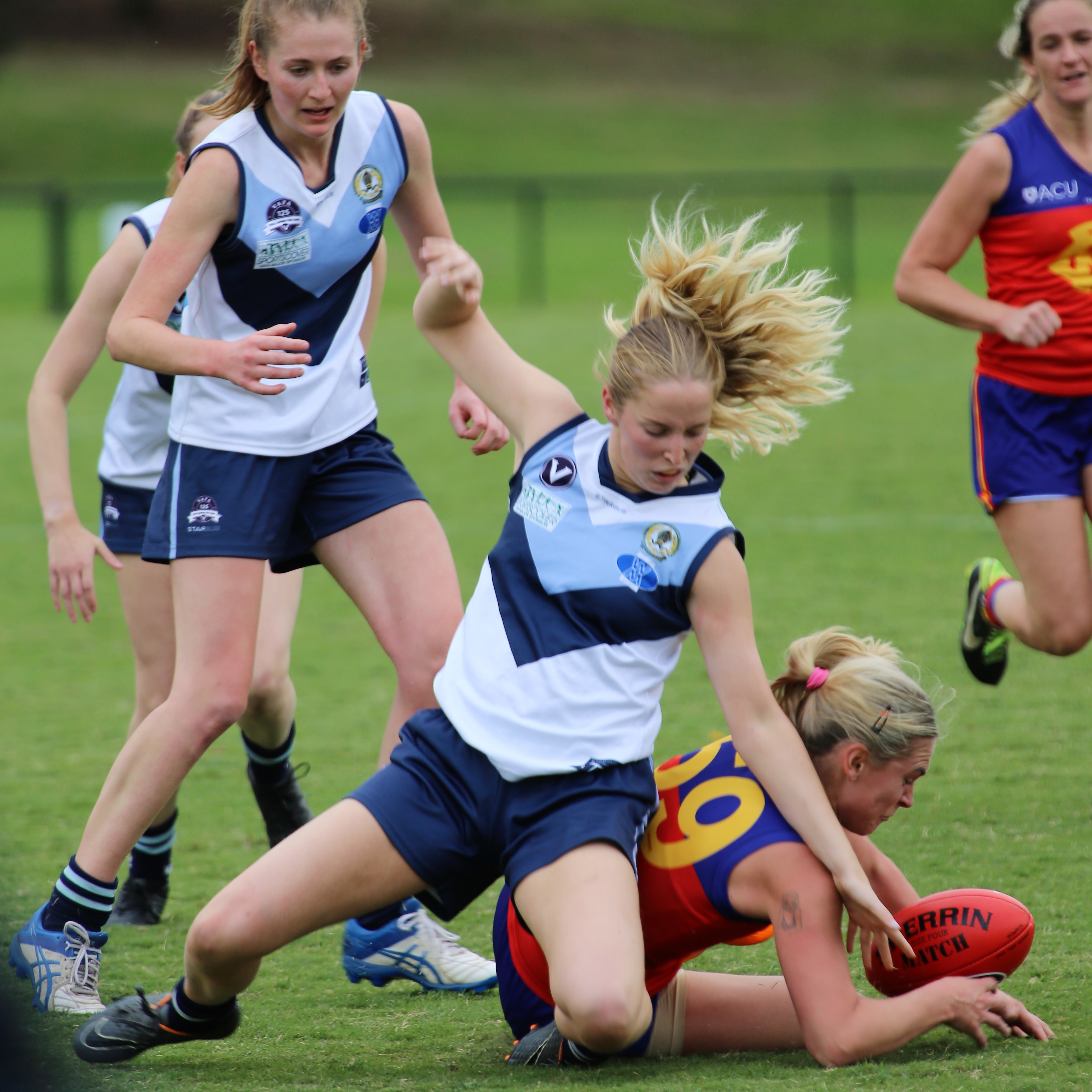 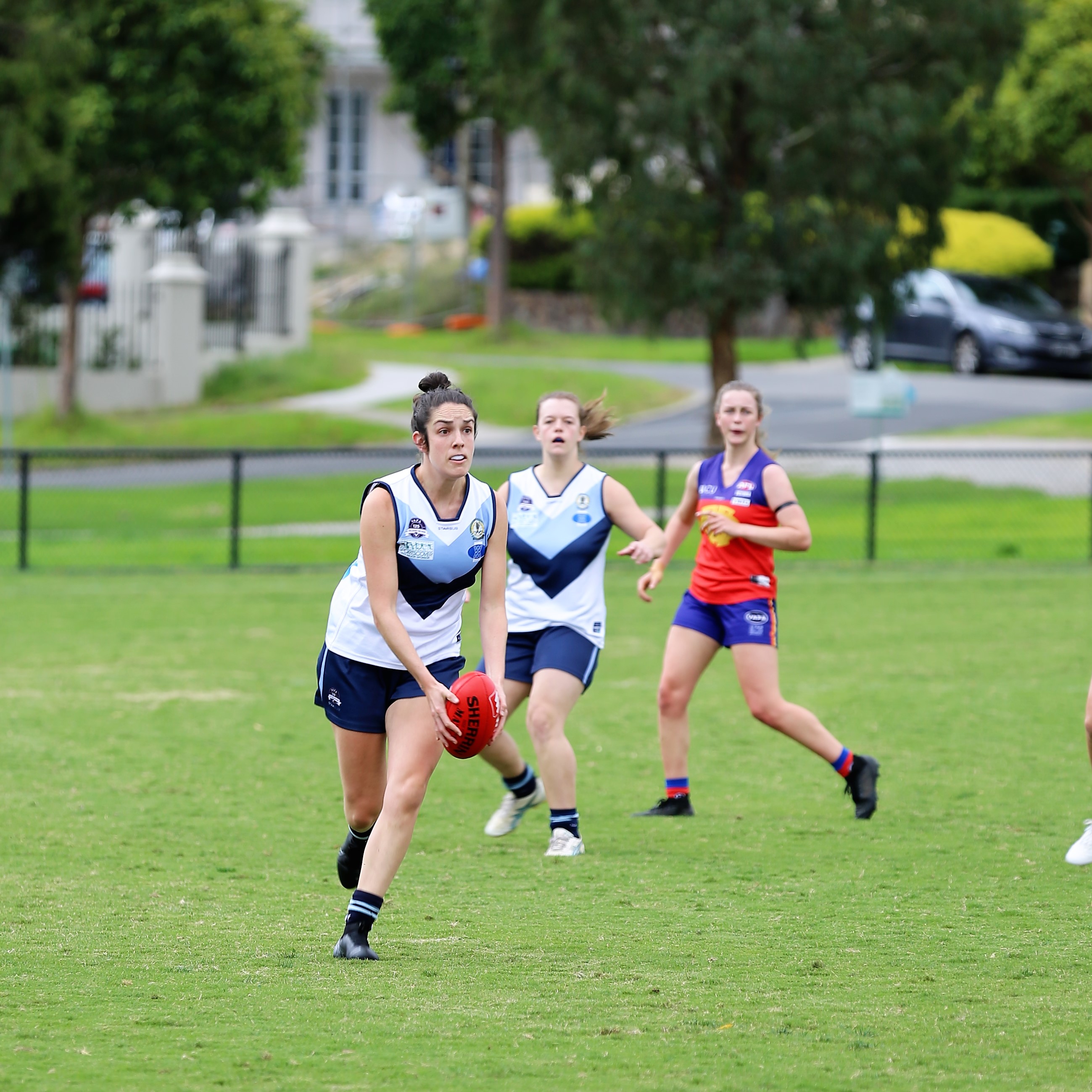 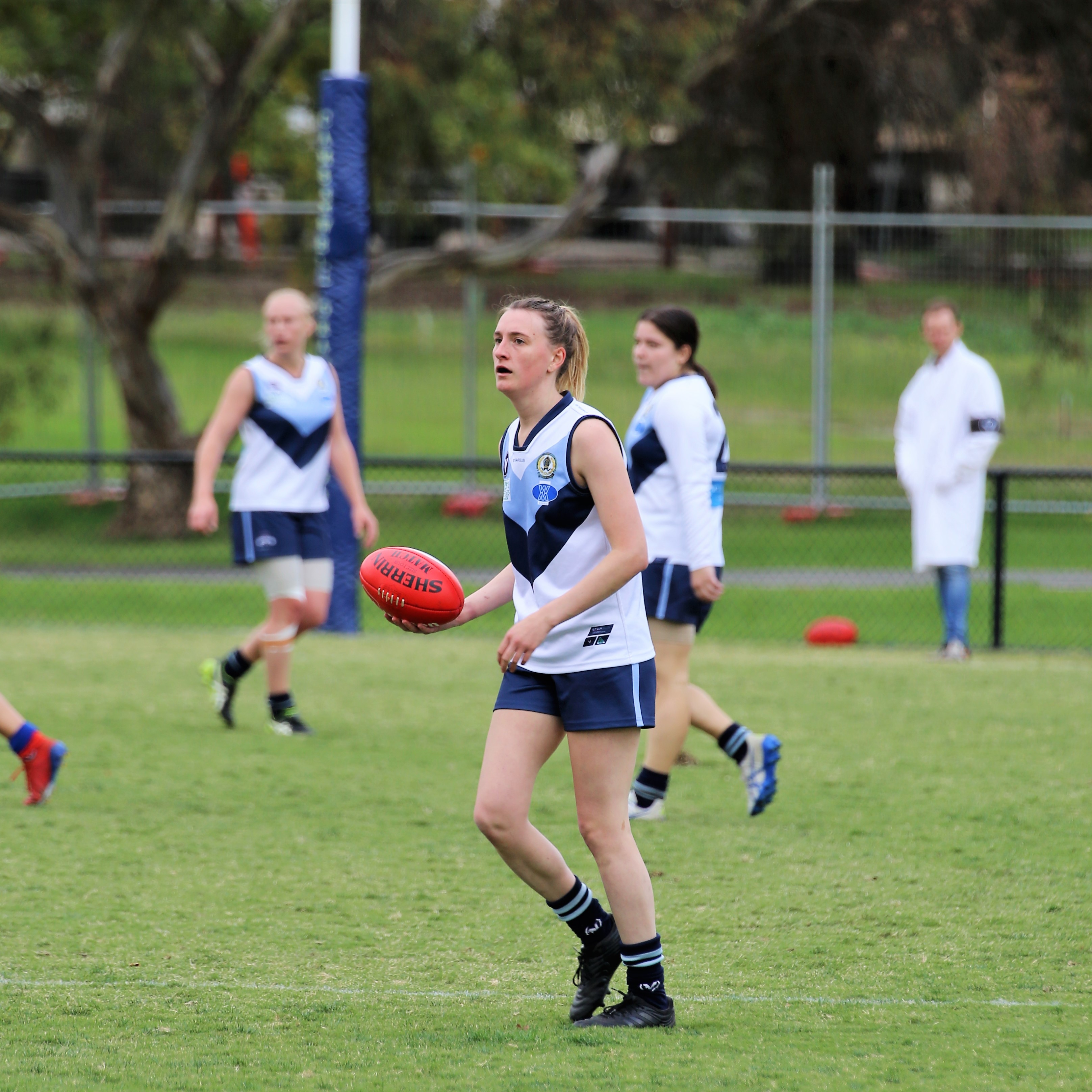 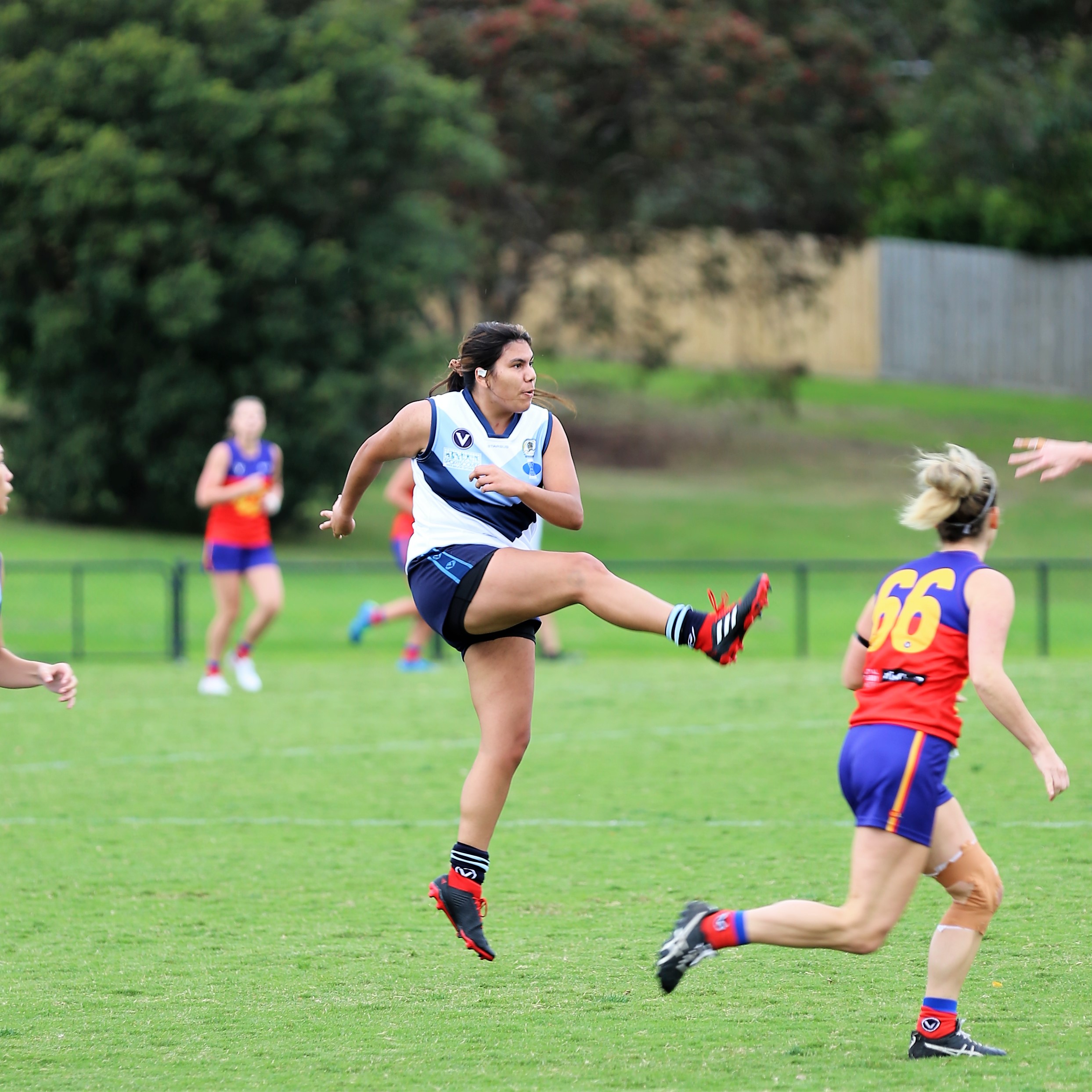 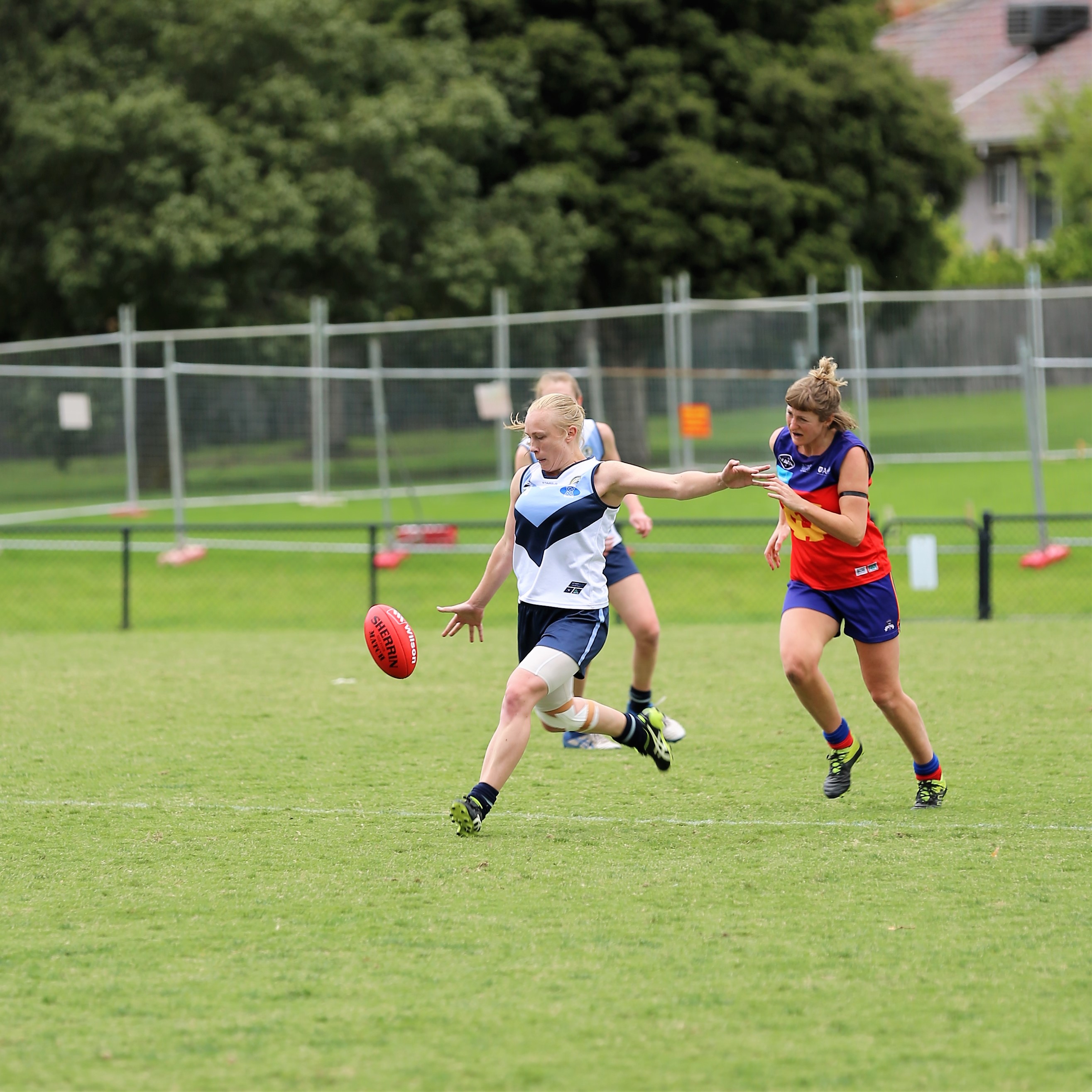 The People’s XVIII faced a tough challenge at home against Monash Uni Blues. With only 18 on the field to start the game, it was amazing to get Macca from the Girl’s Coaching team to strap on the boots to give us a rotation. We started strongly, with Hessman, Cunningham and Hudson-Mollard gaining the ascendancy early. Appleby continued his strong start to the season with a great showing both deep forward and in the middle. We went into the main break with a 7 point lead.

The premiership quarter started with two quick goals to the Wellers before Monash fought back to keep it close heading into the last quarter. The response was strong and it led to a pleasing win by 27 points. Dan Lattanzio was outstanding in the 2nd half in his return, with Berry, Williams and big Charlie MacCallum making valuable contributions. We look forward to La Trobe next week. “Be the 3s”

Mens U19 vs Therry Penola

In Round 3 we travelled to Oak Park to take on Therry Penola, thinking they’d be the best team we’d met to date.

From the outset we were taken by surprise by their run and creativity from half back, but despite their many inside 50’s, our backline held up really well. Will Woods rebounded every foray, his intercept marking a real feature. Max Howden’s ability to win one on one contests in the air, then attack and win the ball at ground level was again great to watch.

Despite our backline’s amazing efforts, we went into half time well down.

In the second half George Kalargyros showed what a versatile footballer he is when moved to centre half back. He’d have taken at least 6 strong marks in the third quarter alone.

Another notable performance came from Geoff Gong. It’s hard to say that the wing can be played better than Geoff did all day.

Overall though it was a good reality check for our Under 19’s team. Going down by 39 points leaves us with a lot to think about and a great chance to bounce back in round 4.

We were at home again this week against Fitzroy, with both teams looking for their first win.

The first quarter was bit of an arm wrestle but it was a much more open game than last week’s with both teams creating chances and getting on the scoreboard early. Charlotte Lack kicked her first goal for the club and Rachel Brazzale immediately made an impact in her first game back for the season being used around the ground across the day.

Fitzroy got on top of us in the second quarter and our backs were put under a lot of pressure. Kara White, Joz Szeredi and Prue Stoyles were pivotal in holding up the barrage of forward entries in defence but our forwards were starved of opportunity and the half time break was a welcomed reset.

The second half was a different story, as our girls came out and executed on a number of things that we’d addressed at the main break. Our mids led by Gemma Smith, Jane Cuningham and Eloise de Rauch wrestled back control and we began moving the ball more freely from stoppages. Emma Vogel, Khadiga Mohamed and Laura Chesney were important for us on the wings as we began to see our speed and foot skills move the ball from the back line into the forward line.

Despite being down to 2 players on the bench at the end, we kept pushing and in the last quarter we were on the hunt. We kicked two awesome goals courtesy of Meg Mckelvie and Eloise de Rauch, and we had run them off their feet. Eliza Dontschuk’s repeated efforts all the way to the end were an example of our persistence and desire to work hard right until the end.

Although we didn’t win, there’s much confidence we can take from the game way and we’ll be raring to go for next week! We’d also like to send our well wishes to Charlotte Kanini-Parsons who had a nasty dislocation of her finger in the first quarter with surgery required to get it fixed.

Round three at Ferndale Park saw Old Camberwell start strongly against St Mary's. Jimmy Wilson was controlling the tap outs with Englenner picking up where he left off last week working well with his mate Bongiorno.

Our forwards were gifted plenty of opportunities with Hayward presenting strongly. Unfortunately, we squandered early opportunities which was to become a frustrating theme for the day.

The backline was led well by Tom Vogel, also standing in as captain for the day, who was able to intercept seemingly at will at times. His supporting cast of Warburton, who was workman like in his efforts all day, and Zimmerman in for his first hit out in the twos, tried there hearts out.

The end of the day saw us fall short by a goal which, given we had led all day, was a flattening result. Still we take away plenty of lessons and a hunger to capitalise on missed opportunities next week.