Taking on the third placed Beaumaris at Banksia Reserve it was always going to be a great match and the weather held up for the contest.

From the first bounce to the final siren it was a see-saw affair. Beaumaris opened the scoring and looked switched on as they jumped out to an early lead. We soon kicked into gear and responded with 2 goals as we settled into the game and trailed by 2 points at the first change. Across the board it was a team effort that saw us start to impact the scoreboard.

The second quarter continued to be an arm wrestle as both teams defences stood up under pressure and in particular our defensive group who managed to stop multiple entries into the opposition forward line. Neither team could break the game open as at the main change a solitary goal was the difference between the sides.

The second half the momentum swings continued as you would expect between the two sides. We managed to control the ball more in the quarter which enabled us to convert two goals to 1 for the quarter meaning that scores were level setting up an exciting final term.

The final term we were switched on from the start as we kicked the first of the term before Beaumaris hit back with a goal of their own. Despite a 2 point lead, we were unable to hold on as  Beaumaris finished strongly and kick the last goal of the game.

While disappointing we couldn’t get the win on the board there was a lot that we can take out of the game as a team as well as some some fantastic plays - Issy Bourke’s banana from the boundary, Maggie Wilson’s goal from long range, El Defina’screativity forward and Sara Fortunato’s work on the wing were just a couple of the highlights from the day.

The Wellers notched up another win with a scintillating second half of footy against a talented outfit.
The rains cleared at GBO and we went into round 11 at near full strength against a 5th placed and in form Therry Penola side pressing hard for a top four spot.

The first half was a very even contest with Therry slightly getting the upper hand with a physical and contested brand of football. We missed some straightforward opportunities for goal and let our opponents dictate termsa little throughout a dour first half. Fortunately, our ever reliable back six led by Cam Wilson, Tom Oliver & Rob Deev kept Therry to a slender 1 point lead at the main break.

After a rev up at halftime, the boys responded superbly with a 13 goal to 3 second half dominant display. Big men Angus Milham & Kellan Percy led the charge taking control of the aerial battle, giving our talented mids Jimmy Allen, Riley Verbi & Josh Holding first use of the football. They didn’t need a second invitation and cashed in on the first class service around the ground and more importantly, drove forward to kick some important goals.

Ben Hart continued his recent fine form with a BOG display with a 5 goals haul. He was well supported by Caine Hiller with great forward pressure, contest and  2 goals to take his overall tally for the Club to 400 goals. A fantastic achievement.
Our boys finished the game well on top and full of running and came away with a 10 goal win with momentum building into the back half of the season. Overall a great team effort after a sluggish start.

Thank you as always for all the help and support from the sidelines. It was great to have our crowd back at GBO and let’s hope we can build some numbers from here! 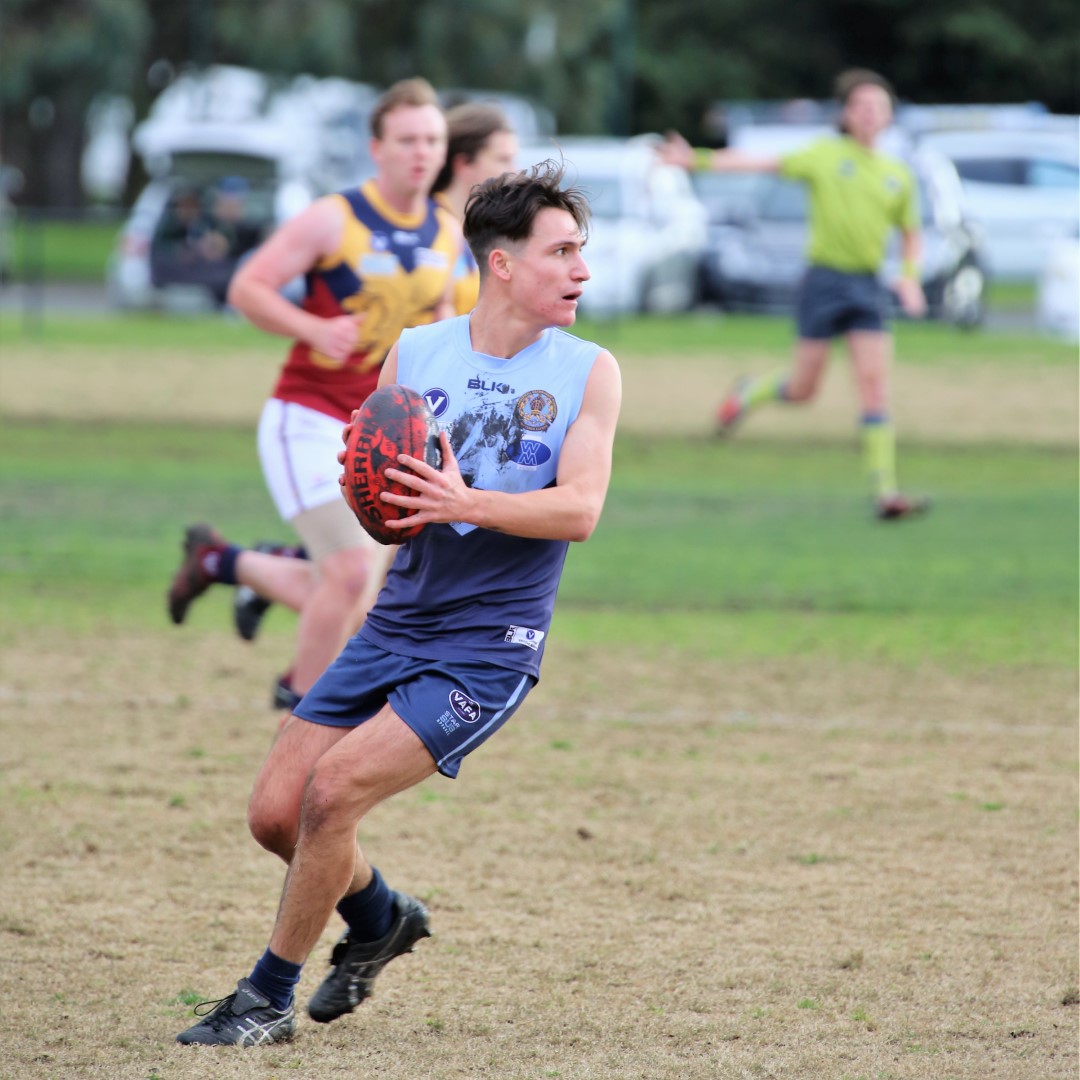 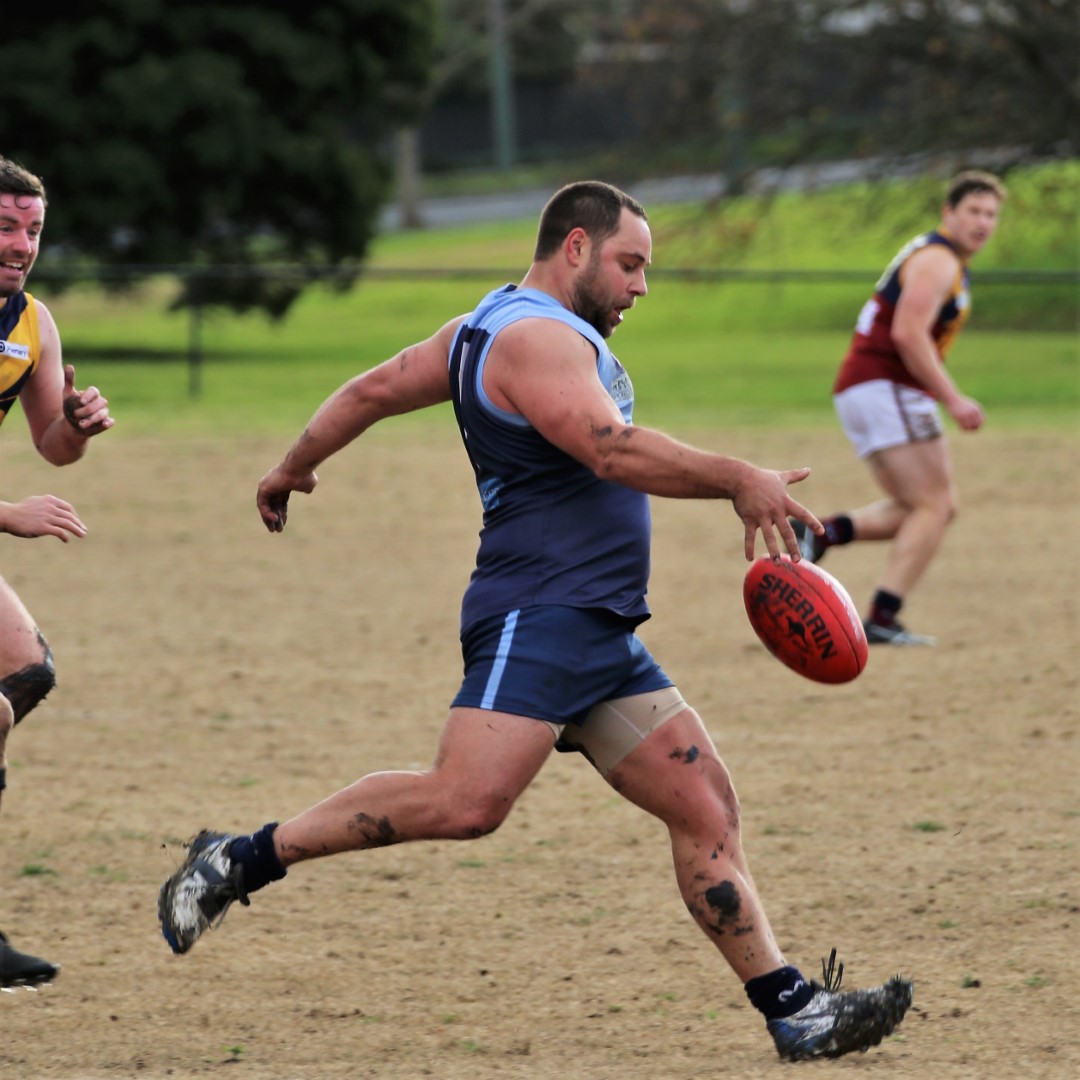 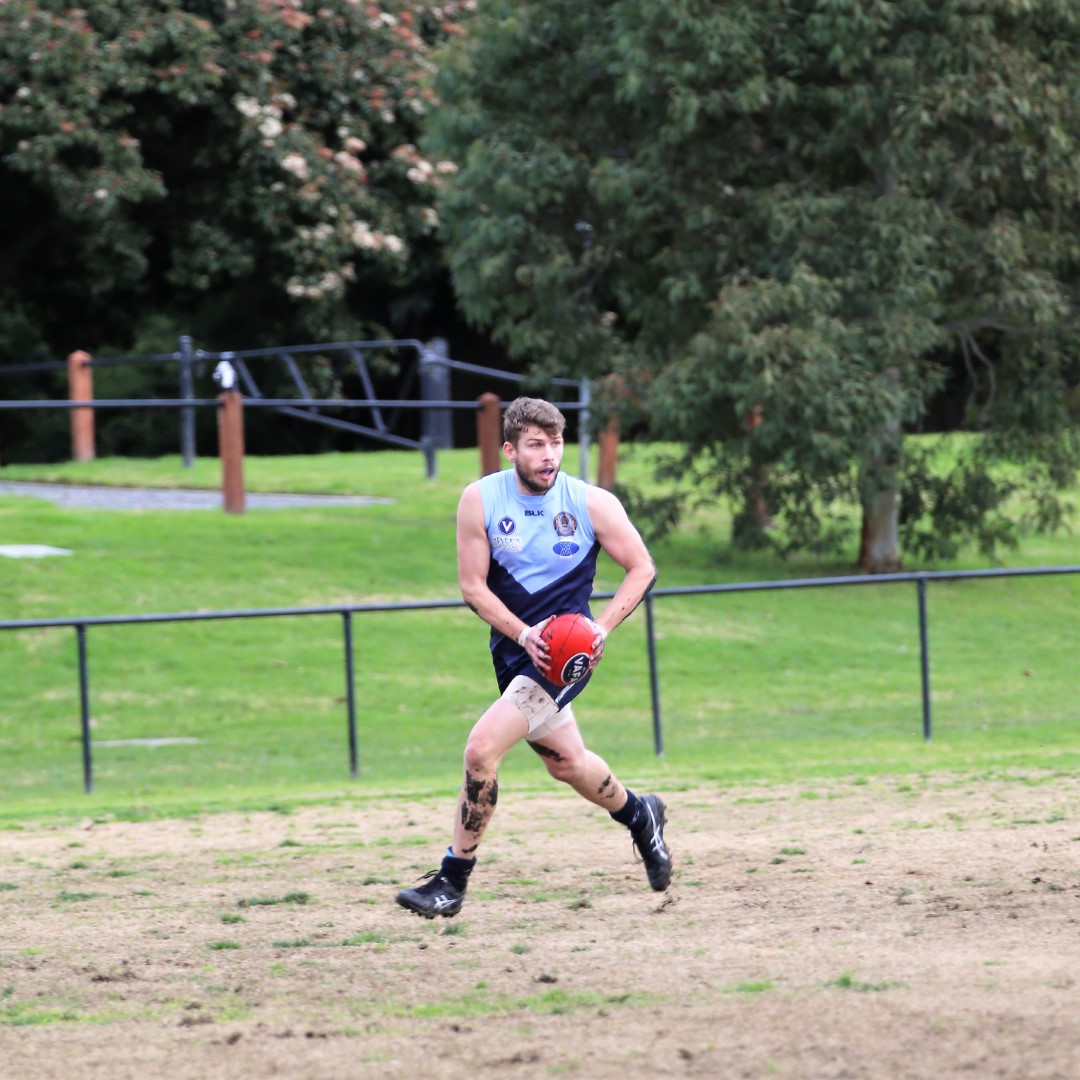 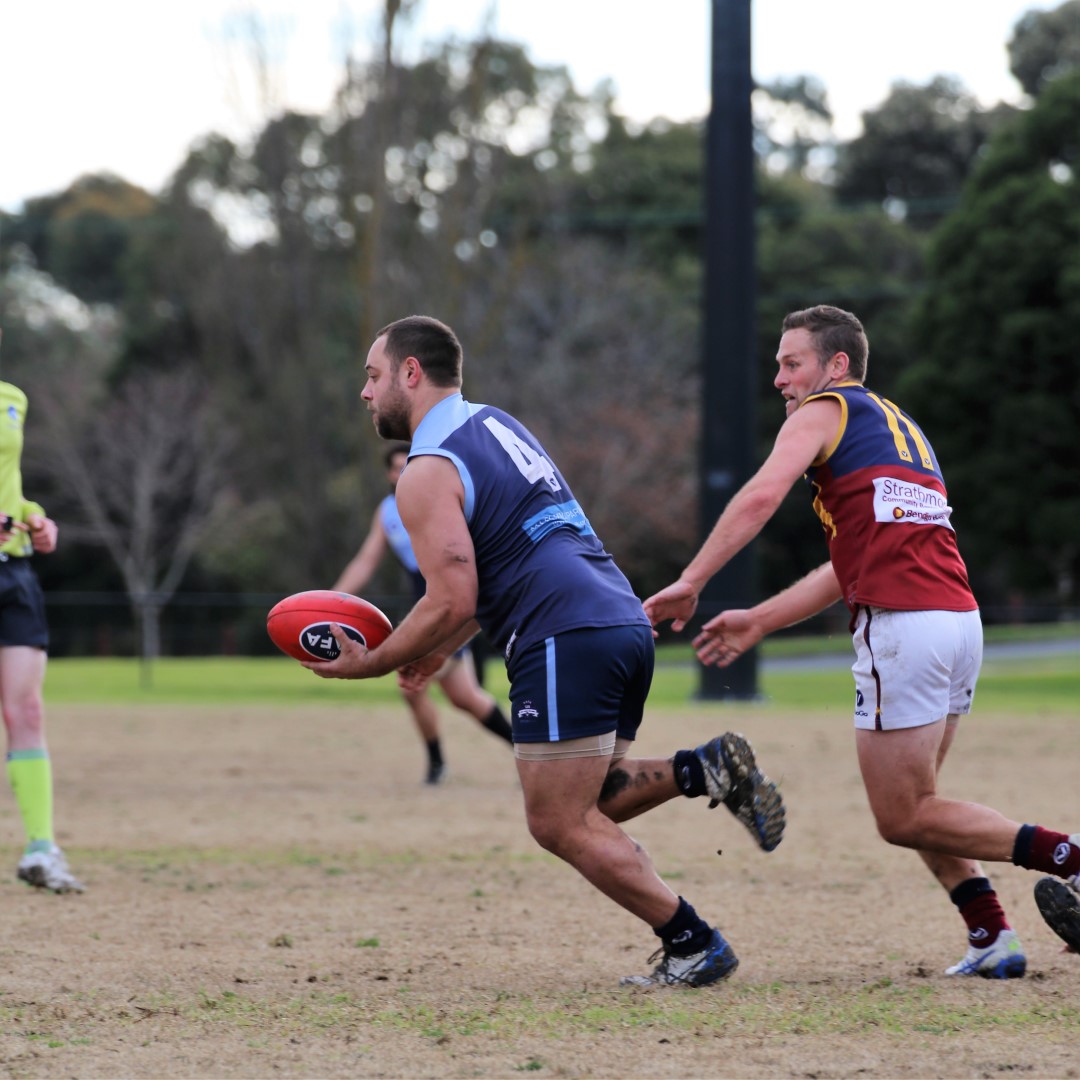 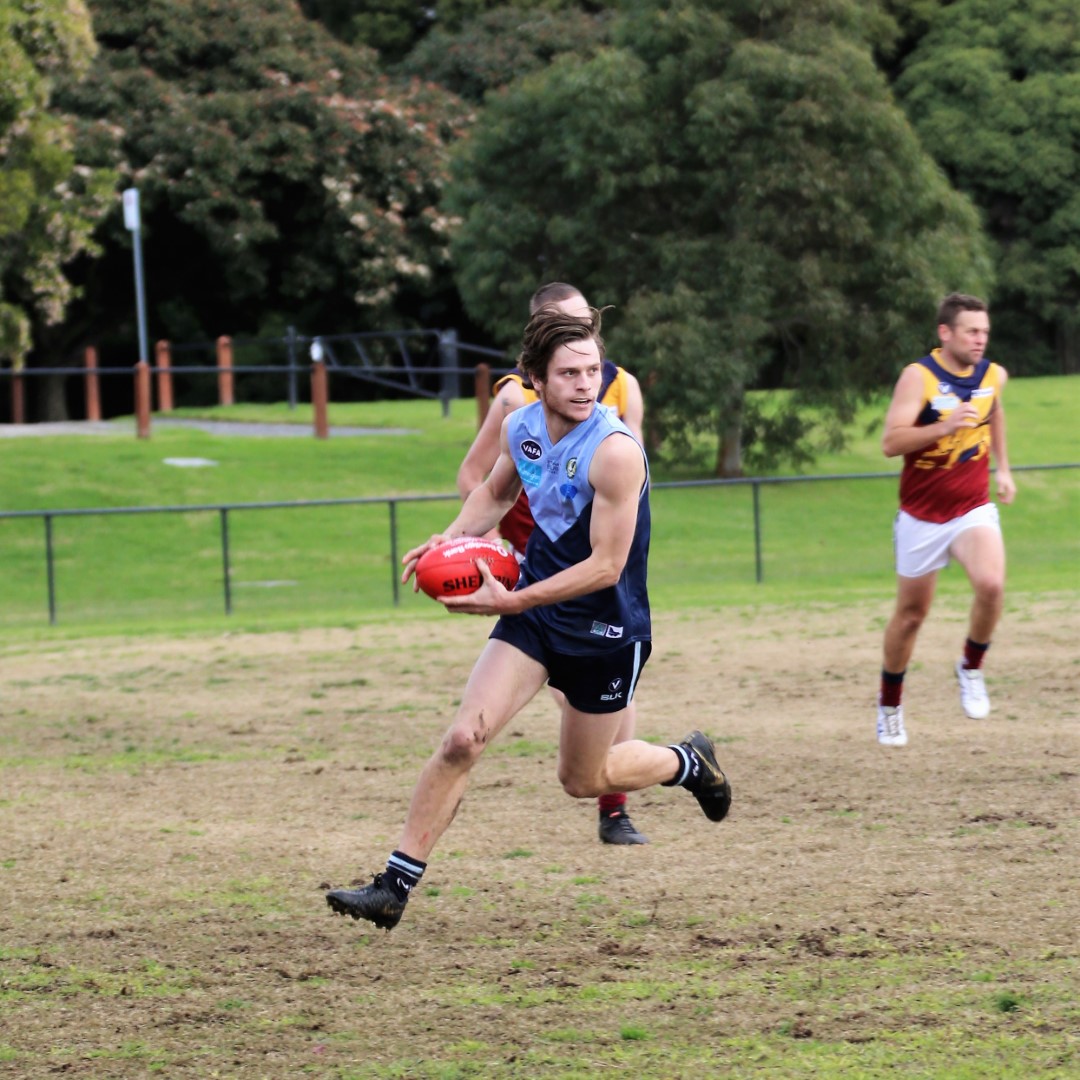 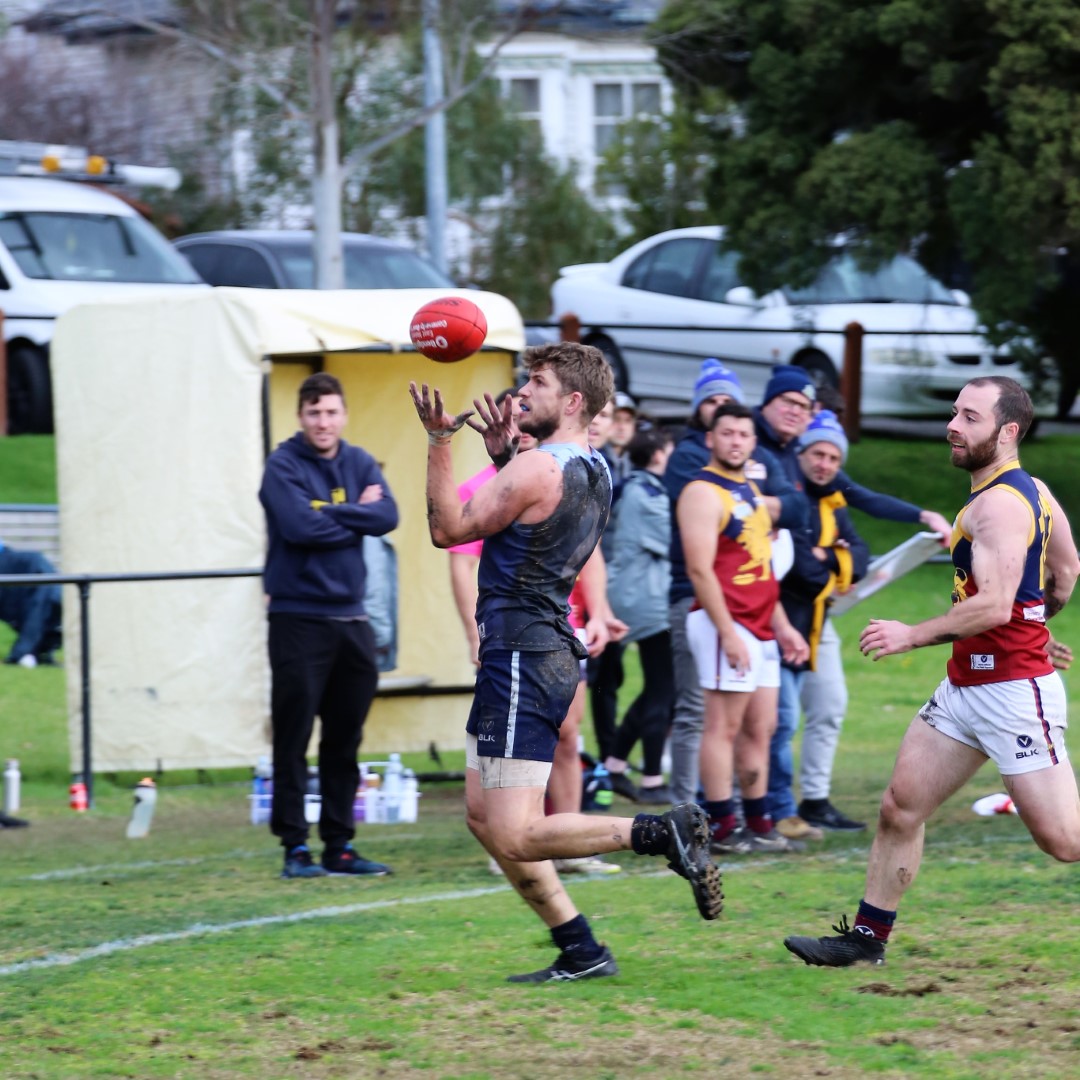 The People’s XVIII took on Parkside at GBO, eager to cement our spot in the top 2 as finals loom. Right from the start though there were signs we weren’t switched on, which resulted in a bit of a tight opening term. Naturally, it was our two Roman warriors, Matt Tesoriero and Anton Giomi, who took it upon themselves to shock the boys into action, with multiple hard efforts.

We found our groove in the 2nd quarter as the cream rose to the top, with Steve Cunningham and Lachie Appleby looking dangerous up forward. Olivier Hessman and Jeremie Alexeyeff in their return games found their rhythm, as did Sam Gussup forward. While this was going on, Zach Herbstreit was bossing the ruck with effective hitouts and control at the stoppages. We went into half time with a 3 goal advantage.

The Premiership Quarter was arguably our most pleasing for the season, as we piled on 7 goals to 2 against our gallant opposition. It was the Luke “Chopper” Hwang show, as his work rate and aerial domination was super impressive. Will Kanzreturning from injury kicked a great solo goal, reminding selectors of what he can in a vintage 2nd half performance. Angus Dunn’s tagging role on their star midfielder played a big part in our midfield ascendancy in the 3rd term, as did Xavier Renehan’s lockdown of their key forward (ably supported by Cyrus Chan).

The last quarter was a bit of a fizzer, as we had won the game in the previous 2 quarters. Ben Williams continued his scintillating form with another good performance on the wing. Sol Zimmerman’s move into the midfield paid dividends as the thrived in the rough and tumble of the contest, as did Harry Berry. With other results going our way, we now sit a game clear on top of the table with 3 rounds to go before finals. Be the 3s.

On a cold Winter morning our under 19’s team ran on to the ground, determined to maintain momentum against Old Paradians. Though the opposition is low on the ladder it was soon apparent that the slippery conditions would suit them. They came to play, they came to scrap.

The first quarter was largely played between the fifty’s, as both backlines stood firm. In our backline Cohen Frazer went to another level, his clean and creative possession a feature. Craigie and Howden were again unstoppable.

Due to injuries to two of our wingmen, Ryan Fitzgerald and Will Woods moved from their usual half back role and took up the challenge. Working together well with the ever dependent Geoff Gong, the 3 of them did a superb job.

Dom Rossetti put on a clinic in the ruck, his deft tap work around the ground setting Ben Kimmitt and Sam Garrard free time and time again. George Kalargyros was an absolute wrecking ball. His hardness at the contest, the man and the ball lifted his team mates every time Old Paradians made a surge.

At the end of each quarter we’d edged slightly further ahead. This is a tough, hard nosed footy team - they are hard to break down, hard to beat.

The difference today was the efforts and creativity of our forward line. Ben Ewens had the ball on a string across half forward, while Harry Laukens worked tirelessly to set up several goals. But it was Eddy Biggs who stole the show. Usually a half back general he was swung to centre half forward in the second half and wow was he good! He lead, he marked, he took the game by the scruff of the neck.

Overall it was a typically gritty team effort that netted another important four points.

Back at GBO for consecutive weeks the Reserve's men were keen to make the most of dry and sunny conditions.
It was clear from the start that our boys had come to play using their pace and dare to take the game on by foot creating plenty of early opportunities. Nick Adamson was presenting well up the ground amassing contested marks by the score but it was Tom Schipper that would take total control inside the arc in his 150th outing for the club. The Wet Head had the stickiest of mitts putting on five goals in the first half.

Our back half were not permitting any entries with Warburton and Gaffney switching the ball well to launch our counter attacks. Chris Young put on another clinic around the stoppages and Matt Vogel took the game on at every opportunity, capping off a great all around performance with a couple of sausages.

The last quarter saw the flood gates open with the Wells really piling on with eight goals. Stone and Kaiser got amongst the action with two and three respectively.

We will take plenty of confidence into next week with the percentage boost. 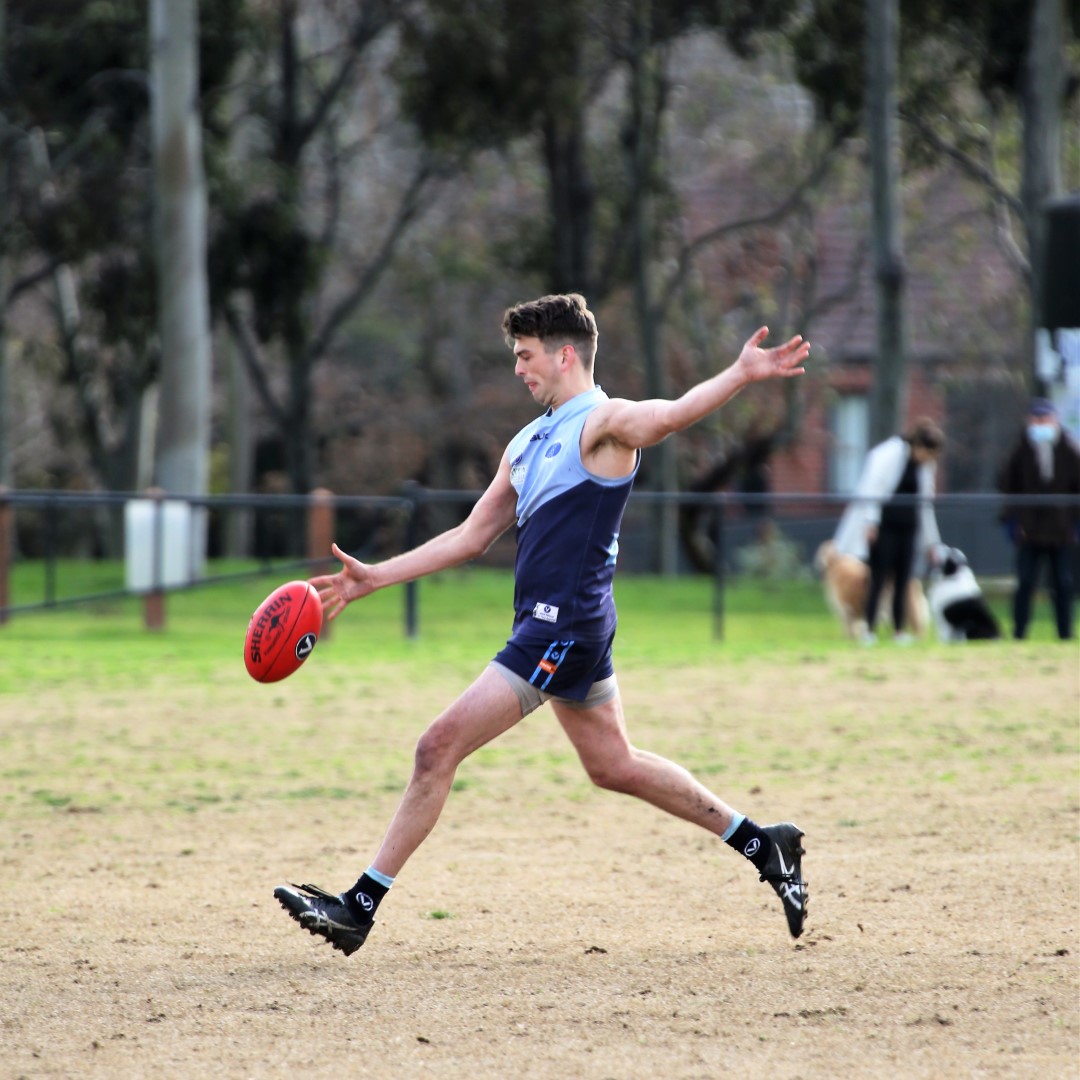 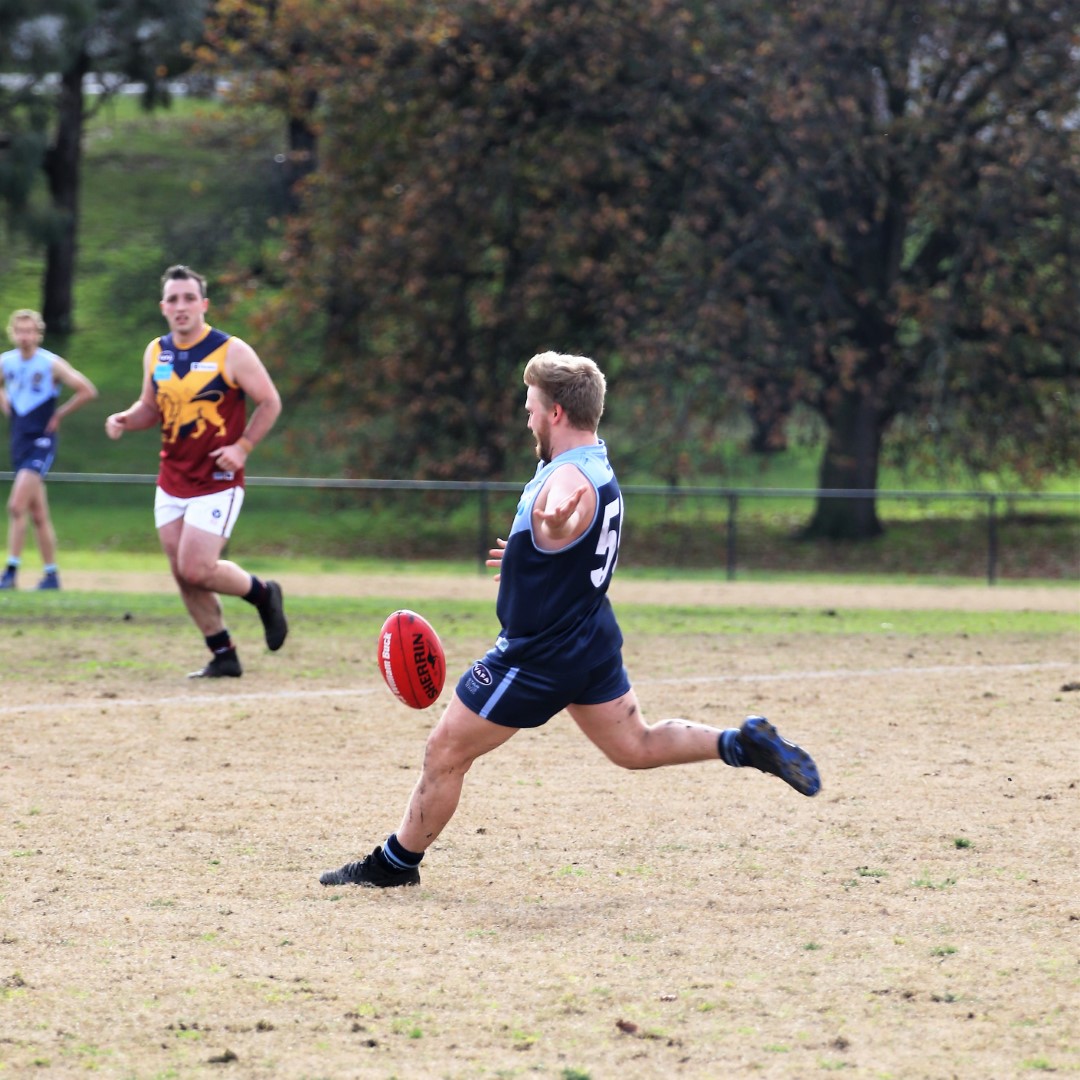 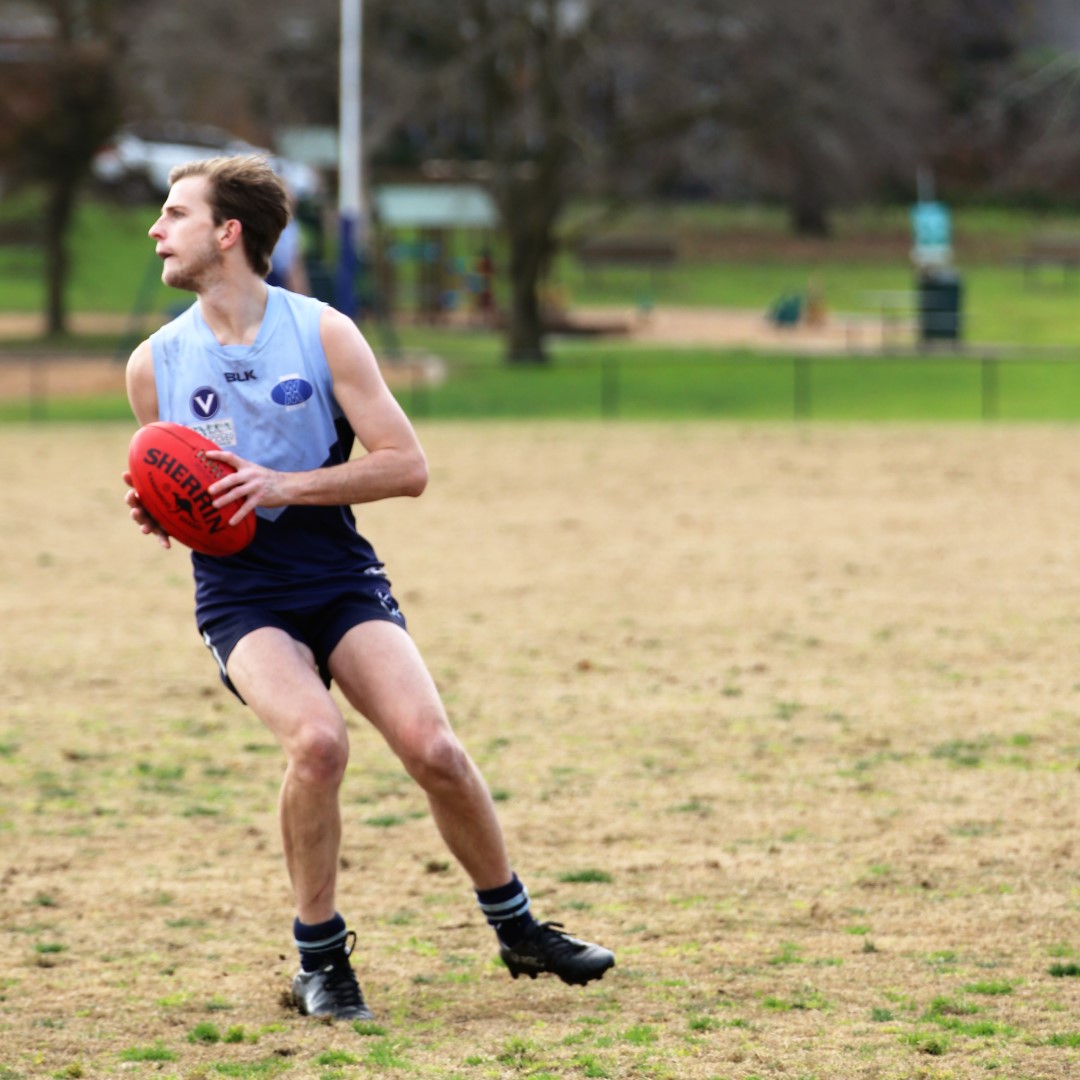 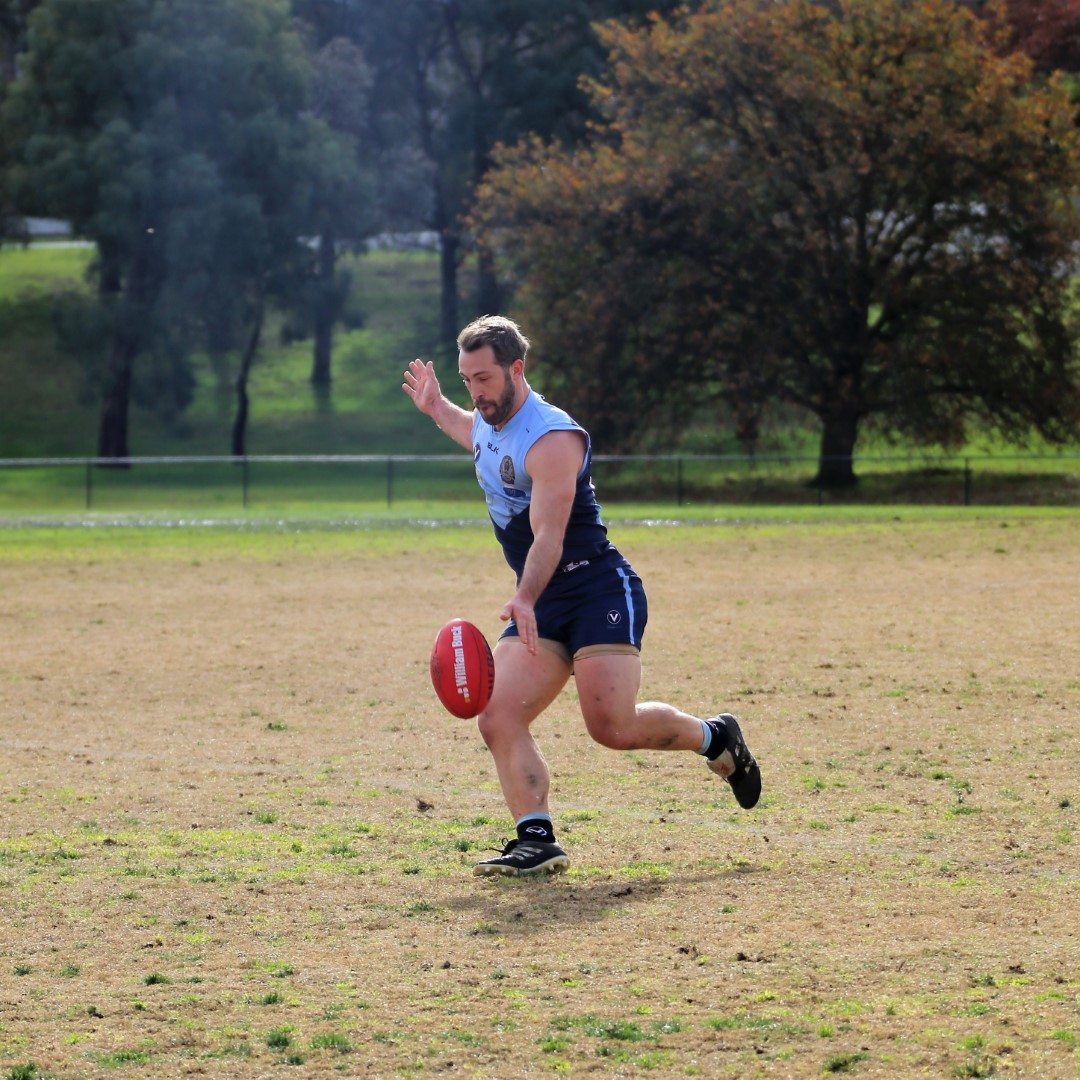 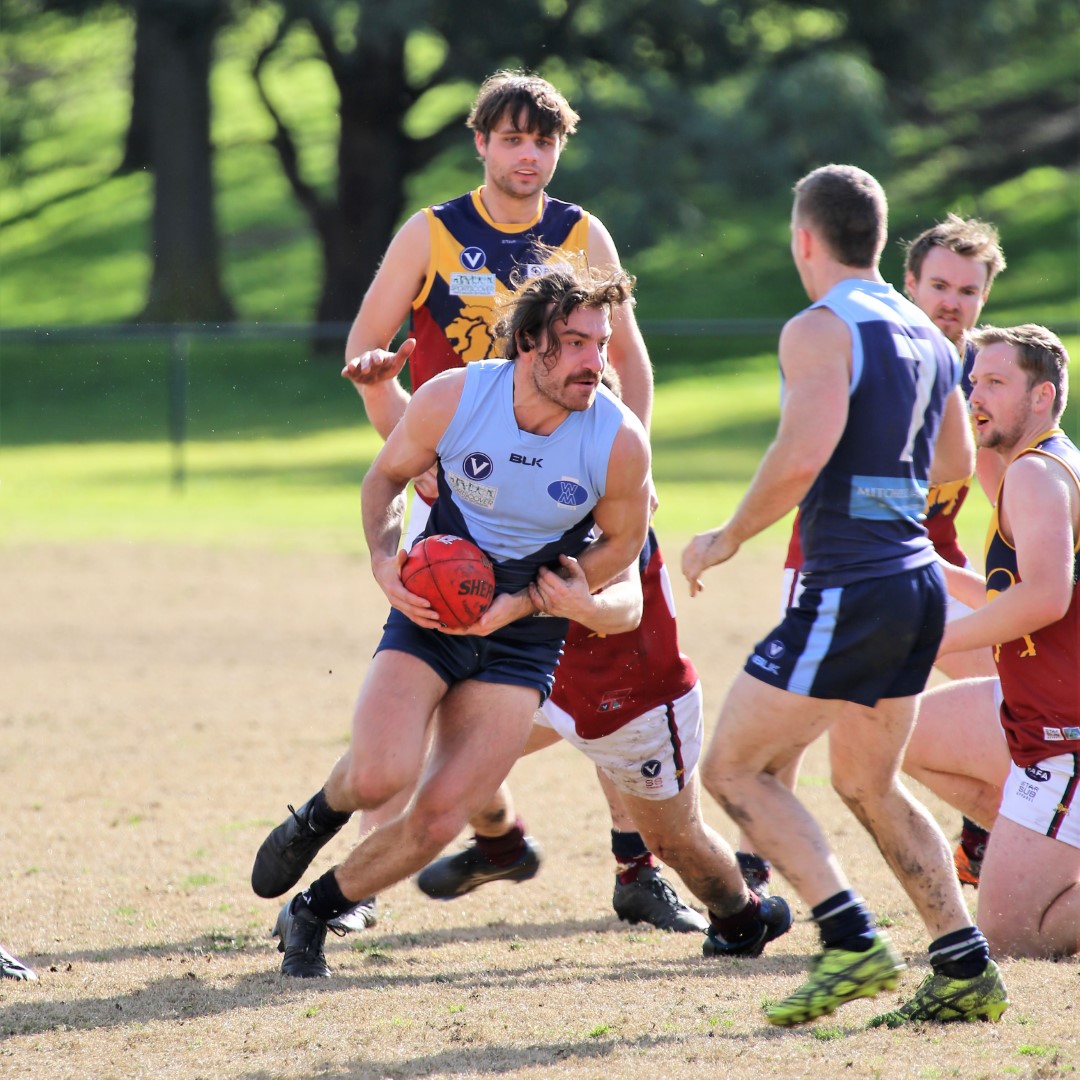 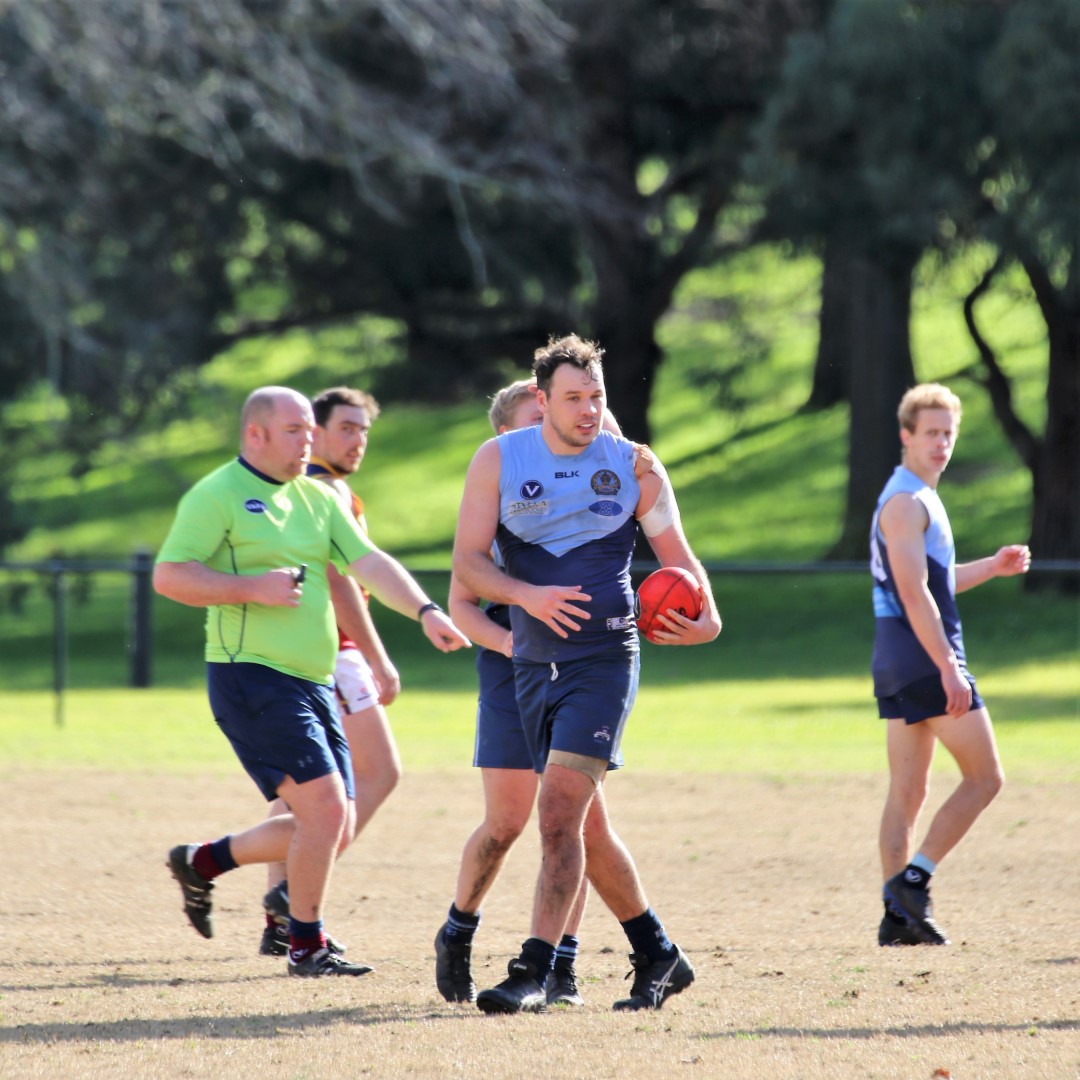 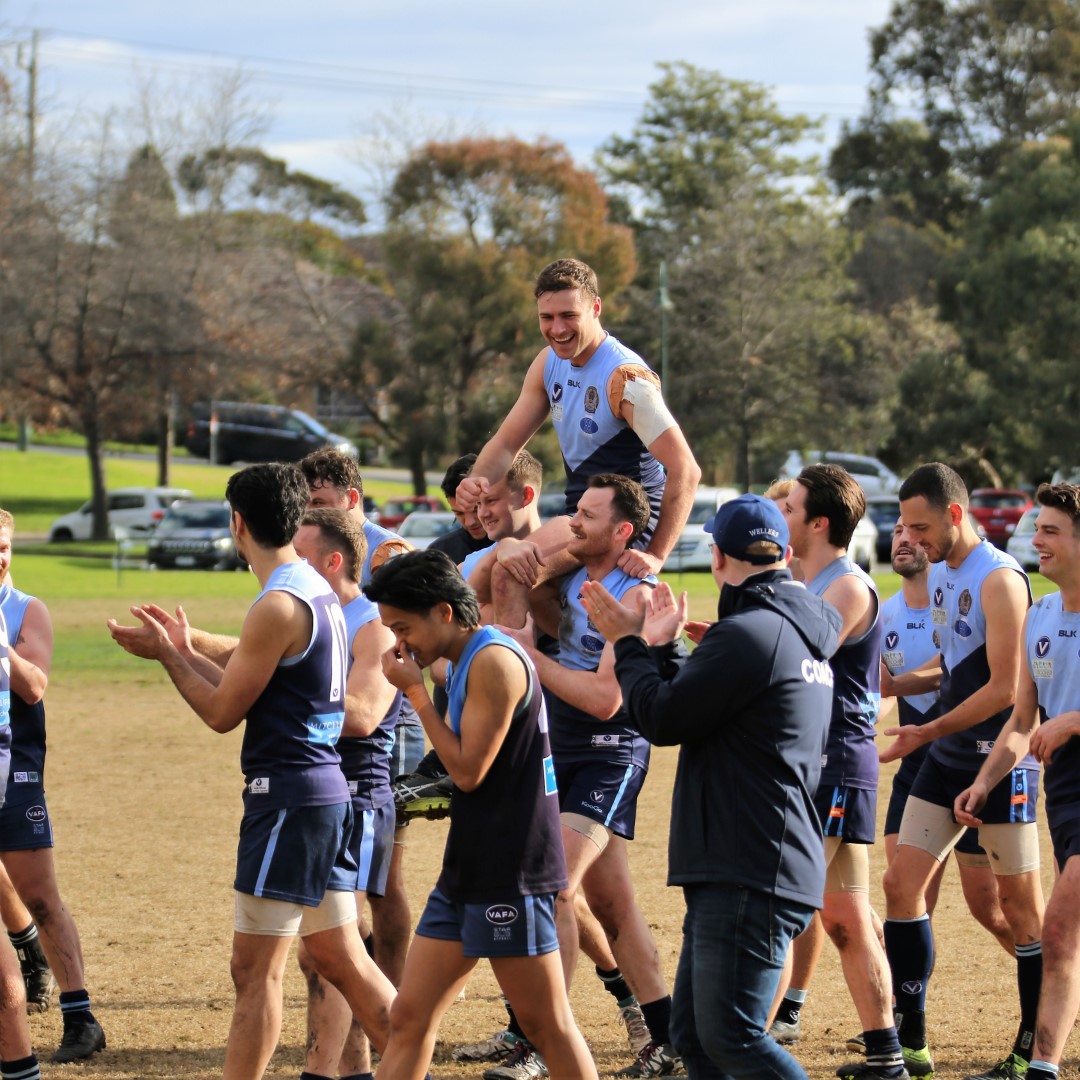 We ventured out to Beaumaris hungry for a win at a ground that was new to all the girls. With only 4 more games for the remainder of the home and away season, we were grateful to be playing and keen to get back on the winners’ list.
Beaumaris started well, winning the first centre clearance and kicking an early goal. Pleasingly, we responded quickly with a superb goal by Laura Chesney, who put together one of her best games of the year and we went into quarter time up by a point.

The second quarter we found ourselves second to the ball and the opposition outworked us around the ground. They made the most of their momentum and put on 3 goals to our none, and we came in at half time with a bit of work to do. The instruction at the main break was for us to tighten up defensively but take the game on and make sure we were first to the ball.

Our second half was really strong with countless examples of our girls breaking through tackles, running into space and taking the game on. Special mentions have to go Adriana Yung, Bella Griffin and Bec Kertes who showcased their speed and ball winning ability in the midfield. Jane Cuningham and Louise Zhang were also both outstanding and while we were unable to turn our infield dominance into scoreboard pressure, we kept them goalless and controlled the play for most of the second half.

Our girls’ performance in the second half was really strong and the scoreline didn’t feel like an accurate reflection of the game. We will be getting to work this week on kicking some goals and earning reward for our hard work around the ground. Looking forward to being back at home next week and taking on Melbourne Uni!

Men Reserves
11:40am vs Brunswick (A)
Gillion Oval, Brunswick MAP